McCarthy: Why I Signed My Friend Nsofor For Cape Town City Nsofor, who won bronze with Nigeria at the 2006 Africa Cup of Nations and silver at the Beijing 2008 Olympics, signed as a free agent for the South African top flight club on Tuesday after leaving German lower division side Darmstadt 98.

“I’ve known Victor from his days in the Nigerian national team, when he used to be a strike partner for Obafemi Martins. Back then, obviously when he signed with Inter as an African player everyone knows about it. It was round about that time I was in England, Spain, Portugal. It is big news for African players when they get such an opportunity. 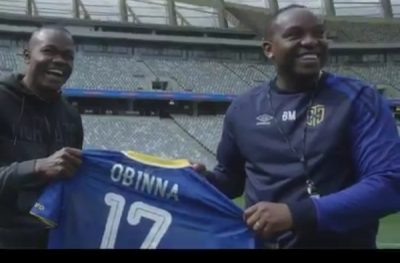 “I came across him at West Ham where we played together. He was a bit youngish, I took him under my wing as I was on the way out. We became friends and always just kept in touch all these years.

“I learnt he was free and doesn’t have a club. Of course when you are in Europe why would you come to South Africa? So I had to persuade him a little bit to get back into football and that he can always go back to Europe. And to my shock and surprise he said, ‘yeah, why not?’ What has he got to lose? So he came down and that’s it, because we were teammates at West Ham and with what he’s seen and read that the team play nice football.

“He’s a very humble guy and hopefully he can teach the guys some stuff or learn from them as he’s been out of African.”