Lionel Messi has dismissed talks about Argentina being the favorites to win the 2018 FIFA World Cup in Russia, but insists the two time winners of the World Cup are a great team.

Messi scored an hat-trick an provided an assist for Sergio Aguero to score the fourth goal as Argentina spanked Haiti 4-0 in a warm up game in Buenos Aires in the early hours of Wednesday Nigerian time).

“I am very grateful to all the people, we always feel the affection of all, not like other times that we received insults,” Messi said after the game in in Buenos Aires.

“We all go to Russia for the same reason, the World Cup is the dream of us, of the country. We are not candidates but we are very good, training and improving day by day.

“We have good players and we are getting stronger to fight as an equal with anyone.” 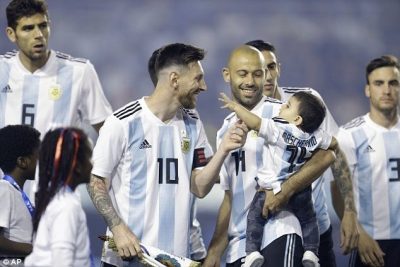 The Barcelona star also stated clearly that Argentina winning their first game against Iceland at the 2018 FIFA World Cup will give the Albiceleste a good start in Russia.

“In a World Cup, logic is almost never given. We have to aim to win the first game, which is the most important because it will give us peace of mind.

“Let no one have doubts that we are going to try everything, as people always ask us.

“We are going with a great squad that is becoming strong at the team and individual level. We are facing a beautiful possibility and we are looking for that.”

Messi, a five-time Ballon d’Or winner is looking to lead Argentina to their third World Cup title in Russia.