The Argentine national team have landed in Nizhni Novgorod ahead of their crucial Russia 2018 World Cup Group D fixture against Croatia, reports Completesportsnigeria.com.

Led by their captain Lionel Messi, the Argentine team arrived at about 2.15pm after their training Wednesday morning in Bronnitsy, according to the team’s Twitter account.

The two-time world champions need to beat Croatia to brighten their chances of advancing to the next round of the competition. 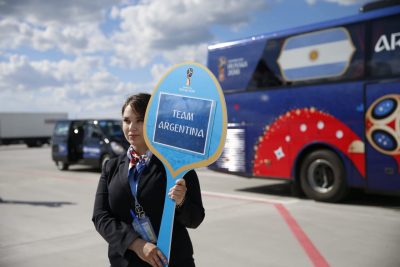 Messi has won 32 titles and five Ballons d’Or in 14 seasons at Barcelona, but has never lifted the World Cup and remains under pressure to land the world title in his fourth appearance at the FIFA World Cup in Russia.

Messi won the Golden Ball as the tournament’s best player at the 2014 edition where Argentina were beaten finalists in Brazil.