Mikel, Ighalo ‘Threaten’ Each Other Ahead Of Chinese League Clash Mikel commented on a photo he uploaded on his Twitter handle where he and Ighalo were squaring off against each other in the colours of Chelsea and Watford during their time in the Premier League.

However Ighalo responded jokingly by stating Mikel will eventually congratulate him after the game.

“You won’t get this close to me at the weekend @ighalojude!” Mikel tweeted.

“Haha skippo you going to congratulate me after the game. Good luck tomorrow,” Ighalo replied.

Ighalo will hope to continue his impressive goal scoring run by scoring in his third straight league game when Changchun welcome Tianjin Teda. 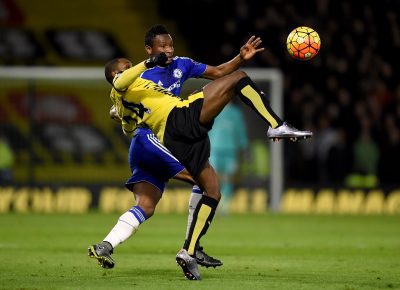 He has scored six goals in his last two games for Changchun and has netted seven goals in nine league games in the current campaign.

On his part, Mikel has scored one league goal in nine appearances.

Changchun are 13th on 11 points, while Tianjin occupy the ninth position with 12 points in the 16-team league table.