Tianjin Teda were swimming in relegation waters prior to the game but Frank Acheampong scored twice in the space of two first-half minutes as they thrashed city rivals Quanjian to move out of the drop zone with five matches left to play.

Mikel played all 90 minutes of the game and his team now sit in 14th place in the 16-team league with same points as 15th placed Yanbian Funde although Teda have a game in hand. 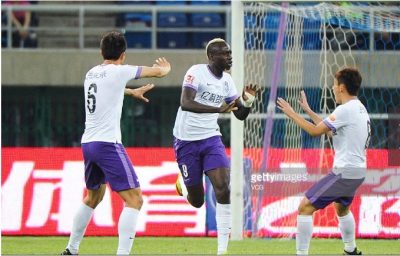 However, the result, which leaves former Italy World Cup winning captain Fabio Cannavaro’s Quanjian two points outside the AFC Champions League play-off round places, is now the subject of a CFA investigation, it has been revealed.

“The Chinese Football Association has launched an investigation into the CSL game between Tianjin Teda and Tianjin Quanjian,” a statement read.

“A probe panel consisting of CFA’s competition and legal departments, Committee for Ethics and Fair Play and a Disciplinary Commission will collect all available facts and evidence related to this game.

“Any violations of fair play would be severely dealt with according to the extant laws.”

Mikel, Ighalo To Land In Nigeria Weekend For Zambia Clash

Quanjian ran out 3-0 winners in the sides’ previous meeting in May but neither team has publicly commented on the announcement of the investigation.

It is not the first time Tianjin Teda would be involved in match-fixing allegations. In 2013, a 3-1 victory over Liaoning Whowin led many in the media and footballing community to cast a suspicious glance over the match.

In a midweek CFA Cup match between the two sides, Liaoning crushed struggling Tianjin 5-0, with on-form Edu scoring a hat trick but in the league match between both teams few days later, Tianjin won 3-1 giving rise to speculations that Liaoning and Tianjin agreed to a “trade” of league cup advancement for crucial league points.