Ahead of the Super Eagles’ final pre-World Cup friendly game against Czech Republic in Austria on Wednesday, Completesportsnigeria.com’s JAMES AGBEREBI presents the outcomes of the Eagles’ previous final tune-up games before heading to past World Cups…

This was the Super Eagles’ last friendly before departing for the United States for the 1994  World Cup which was their debut in the global showpiece.

The Super Eagles won 5-1 game at the Lekan Salami Stadium in Ibadan.

A brace each from the late Rashidi Yekini (11th, 43rd minutes) and Samson Siasia (58th, 60th minutes) and a goal from Mutiu Adepoju (65th minute) secured the impressive win.

The Eagles went on to do well at the 1994 World Cup as they topped their group that had Argentina, Greece and Bulgaria before losing 2-1 to 10-man Italy in the round of 16 after extra-time.

Before flying out to France for the 1998 World Cup, the Super Eagles’ last warm up game was against Netherlands in Amsterdam.

The game was a whitewash as the Super Eagles were thrashed 5-1.

Nwankwo Kanu’s penalty only served as a consolation for the Super Eagles after Daniel Amokachi was fouled inside the box.

Despite their poor preparations towards the 1998 World Cup, the Super Eagles shocked one of the favourites Spain 3-2, beat Bulgaria 1-0 to qualify for the round of 16 with a game to spare against Paraguay (which they lost 3-1).

They were eventually knocked out in the round of 16 following a 4-1 defeat to Denmark. 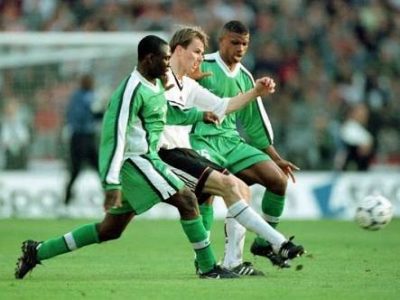 The Super Eagles took on the Reggae Boys of Jamaica in their final friendly game before the start of the 2002 World Cup in Korea/Japan.

Former junior international James Obiorah scored the only goal of the game in the 48th minute at Loftus Road in London.

At the World Cup proper, the Super Eagles crashed out in the group stage after being drawn with Argentina (lost 1-0) Sweden (lost 2-1) and England (drew 0-0).

After arriving in South Africa for the 2010 World Cup, the Super Eagles faced North Korea in their final tune up game in Tembisa.

Nigeria raced into a two-goal lead with goals from Yakubu Aiyegbeni (16th minute) and Obinna Nsofor (60th minute) before Jong Tae Sae halved the deficit in the 82nd minute.

However, Obafemi Martins scored in the 91st minute to secure a 3-1 win for the Eagles.

It however turned out to be a disastrous campaign for the Super Eagles as they got eliminated in the group stage.

In their last friendly before the Brazil 2014 World Cup, the Super Eagles faced USA.

It was the Americans who won as a double for Jozy Altidore (31st, 68th minutes) gave them a 2-1 victory.

The Super Eagles goal was scored by Victor Moses from the penalty spot with four minutes left.

Grouped with Argentina, Iran and debutants Bosnia Herzegovina at the 2014 World Cup, the Super Eagles progressed into the round of 16. Argentina topped the group.

In the round of 16, the Super Eagles lost 2-0 to France to exit the tournament.