By Johnny Edward:
Alvaro Morata took his Premier League goals tally to six with a hat-trick for Chelsea who continued their impressive start to the season with a 4-0 win over Stoke City at the bet365 Stadium on Saturday.

Nigeria star Victor Moses also made his fifth start of the season in the encounter in which Stoke also had several chances.

Morata scored in the first minute of the encounter for Chelsea with a brilliant finish.

The lead was doubled in the 32nd minute by Pedro who latched on to a poor chested back pass from Darren Fletcher to fire past Jack Butland in goal for the Potters.

At the start of the second half, Stoke came close to pulling a goal back but efforts from Maxim Choupo-Moting, Xherdan Shaqiri and Fletcher failed to trouble Thibaut Courtois in goal for Chelsea.

Morata made it 3-0 by finishing off a solo effort and the Spanish striker completed his hat-trick by tapping in a pass from Cesar Azpilicueta in the penalty area.

Morata could have scored a double brace when he was played through on goal by Eden Hazard but his shot was inches wide. 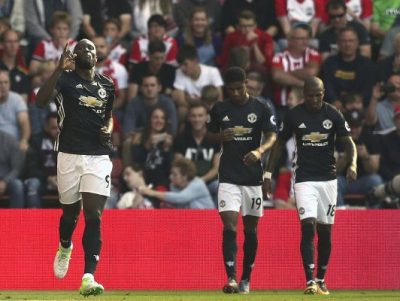 At the Saint Mary’s Stadium, Romelu Lukaku gave Manchester United a hard fought 1-0 win over Southampton. The Belgian striker finished off his rebounded header in the 34th minute of the encounter.

Despite the win, United surrendered their top spot to city rivals Manchester City due to an inferior goal difference.

At the Etihad Stadium, a brace from Raheem Sterling and goals from Leroy Sane, Sergio Aguero and Fabian Delph for Manchester City ensured a 5-0 thumping of Crystal Palace. The win sent Pep Guardiola’s side to the top of the EPL log with a superior goal difference over United. 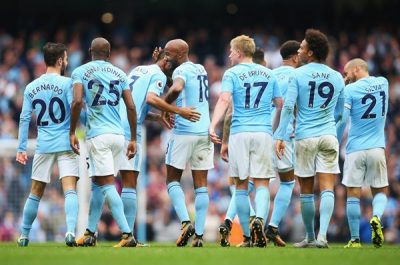 Everton came from a goal down to beat Bournemouth 2-1 at Goodison Park as Omar Niasse’s brace cancelled out a 49th minute goal from Joshua King.

Tammy Abraham, the player who spurned Nigeria’s advances this week, scored his second league goal of the season for Swansea who lost 2-1 to Watford that had Isaac Success on the bench for the whole encounter.

Burnley and Huddersfield Town played out a goalless draw.