By Johnny Edward: In the first-ever African Nations Championship (CHAN) final for both Morocco and Nigeria, who beat Libya and Sudan respectively in the last four of the competition, the hosts are banking on top scorer Ayoub el Kaabi to fire them to glory on Sunday at the Stade Mohammed V in Casablanca, Completesportsnigeria.com reports.

Kaabi has scored a record eight goals so far at the tournament and the hosts will be confident the Renaissance Berkane star can help them avenge the 4-3 defeat to Nigeria in the quarter-finals of the competition in 2014.

The 24-year-old striker scored a hat-trick against Guinea, a brace against Mauritania and Libya and a goal against Namibia.

Morocco attacker, Achraf Bencharki, who joins Al Hilal after the CHAN, said during his team’s pre-match conference Saturday evening that the Atlas Lions stand a great chance of lifting the trophy with el Kaabi leading the attack. 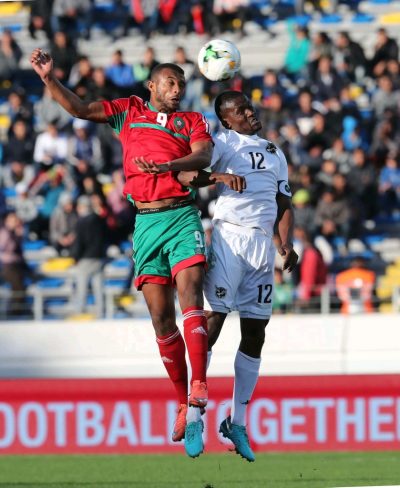 “Ayoub is the complete striker, a fantastic footballer,” Bencharki said during the pre-match conference in Casablanca.

“With him in the team, defeating Nigeria and winning the CHAN trophy is a realistic goal.”

Midfielder Walid el Karti added: “El Kaabi is such a humble footballer and a great team person. He remains grounded after individual feats, like his hat-trick against Guinea.”

In South Africa in 2014, the Home Eagles overturned a three-goal half-time deficit to triumph 4-3 after extra time with Rabiu Ali, who scored in that encounter, still in the current squad.

Both Morocco and Nigeria have recorded four wins and a draw each but the Home Eagles of Nigeria have scored fewer goals than the Atlas Lions.