Victor Moses was left out of Chelsea’s match day squad for the first-time this season as The Blues recorded a hard-fought 2-0 home win over Bournemouth in Saturday’s English Premier League game at Stamford Bridge, Completesportsnigeria.com reports.

Moses has made only one substitute appearance for Chelsea since the start of the season.

Pedro Rodriguez came off the substitutes’ bench to score the opener in the 72nd minute of the encounter before Eden Hazard finished off a brilliant move in the 85th minute firing his shot past Asmir Begovic for Maurizio Sarri’s team who made it four wins from their opening four games.

The Blues started off brightly carving out three chances in the opening 30 minutes with Mateo Kovacic, Alvaro Morata and Willian all coming close.

Kovacic making his second start of the season found space at the edge of the box but his goal bound shot was saved by Begovic.

The Bosnia Herzegovina goalkeeper also made another save to deny Alvaro Morata in the 23rd minute.

Pedro made an instant impact scoring Chelsea’s opener eight minutes after he replaced Willian in the second half.

Hazard sealed of the win for the Blues finishing off a cool move inside the edge of the box.

Leon Balogun watched from the bench as Brighton & Hove Albion played a 2-2 draw wih Fulham at the Amex Stadium. Balogun has made three appearances this season – two starts and one substitute appearance on his debut. 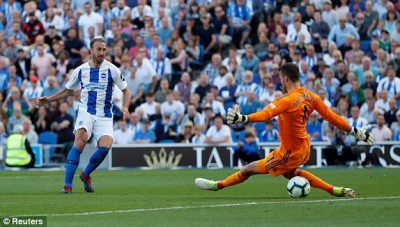 At the Olympic Stadium, Wolverhampton recorded their first win of the EPL season defeating West Ham.

Adama Traore scored the winner in additional time to hand the Hammers their fourth successive league defeat in the EPL.

Crystal Palace suffered their third defeat of the season losing 2-0 at home to Southampton. A goal in each half from Danny Ings and another from Jannik Vesteregard in stoppage time secured a hard fought win for the Saints.