Nigeria duo of Victor Moses and Ola Aina will receive instructions from a new manaager at Chelsea after the Blues appointed Maurizio Sarri on Saturday.

Sarri previously coached Napoli manager in the Italian Serie A for three years where he led them to a second place finish twice.

Sarri, who has signed a three-year contract, and told the club’s official website : “I am very happy to be coming to Chelsea and the Premier League. It is an exciting new period in my career.

“I look forward to starting work and meeting the players on Monday ahead of travelling to Australia, where I will be able to get to know the squad and begin our match action.

“I hope we can provide some entertaining football for our fans, and that we will be competing for trophies at the end of the season, which is what this club deserves.”

Meanwhile, Chelsea director Marina Granovskaia added: “We are delighted to welcome Maurizio and are looking forward to him bringing his football philosophy to Chelsea.” 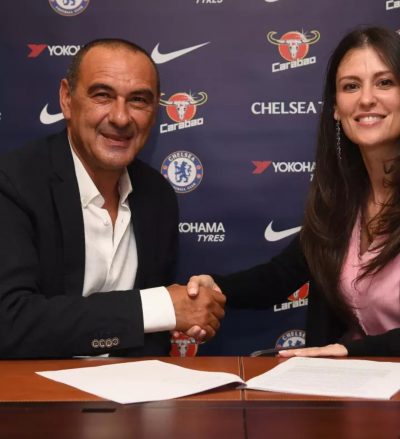 “Maurizio’s Napoli side played some of the most exciting football in Europe, impressing with their attacking approach and dynamism, and his coaching methods significantly improved the players at his disposal.”

“He has plenty of experience in Serie A and the Champions League and we know he is relishing the chance to work in the Premier League.”