Spurs came from behind to win 3-1 in the Premier League at Stamford Bridge on Sunday.

It was the first time Chelsea would lose to Spurs in the league at Stamford Bridge since a 2-1 defeat in 1990.

The game saw the return of Harry Kane who was sidelined with an ankle injury.

Alvaro Morata shot Chelsea into the lead off a Moses cross before a brace from Dele Alli and Christian Eriksen secured the impressive win for Spurs.

Spurs now have 64 points in fourth spot and are eight points clear of Chelsea who are fifth in the league table.

Alli had Spurs’ first chance on nine minutes but could not direct Christian Eriksen’s right-sided cross towards goal.

In the 18th minute, Willian saw his low shot take a deflection before Hugo Lloris pushed it away to safety.

A minute later Marcos Alonso thought he had given Chelsea the lead after volleying in N’Golo Kante’s cross but he was flagged for offside.

Chelsea went close on 28 minutes following a break but Moses’ deflected shot was saved by Lloris.

In the 29th minutem Chelsea eventually broke the deadlock as Morata rose highest to nod in Moses’ cross from the byline into the net after poor judgement from Lloris.

One minute into first-half added time Spurs were back on level terms through Eriksen who let fly a dipping shot from 25 yards which went past Willy Caballero.

Two minutes into the restart, Chelsea got off on the front foot with Moses hitting from range which was blocked.

In the 62nd minute, Spurs went 2-1 up as Alli superbly brought down Eric Dier’s cross before applying a brilliant finish.

Alli was on target again to make it 3-1 as he finished off from close range after Caballero had twice denied Heung-Min Son. 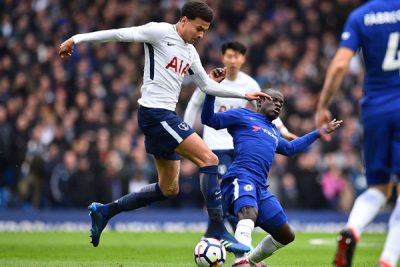 Chelsea tried to claw their way back into the game and were close on 71 minutes only for Alonso to hit the side-netting.

With less than 10 minutes remaining, Chelsea brought on Olivier Giroud and Callum Hodson-Odoi to try and salvage something from the game.

In the 89th minute Chelsea substitute Emerson burst from the left flank but saw his cross well claimed by Lloris.