By Adeboye Amosu:                            Nigeria winger Victor Moses on Thursday bagged the winner as Chelsea beat Burnley 2-1 in the Premier League at Turf Moor to revive their hopes of claiming a UEFA Champions League spot, reports.

It was Moses’s third goal in 25 appearances for the dethroned English Premier League champions this season.

The former Wigan star also had a hand in Antonio Conte’s men first goal on the 20th minute of the encounter. 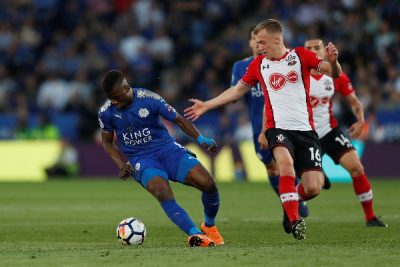 He received a long pass from Gary Cahill and his cross was bundled home by Kevin Long.

They were made to pay for those missed chances when Ashley Barnes equalised for the hosts in the 66th minute.

Johann Berg Gudmundsson’s shot looked to be heading wide, only for it to hit the heel of Barnes and creep past Thibaut Courtois.

At the King Power Stadium also on Thursday, Leicester City and Southampton battled to a 0-0 draw with the duo of Wilfred Ndidi and Kelechi Iheanacho involved from the start.

Ndidi, who made his 32nd league appearance for the Foxes in the game, played the entire 90 minutes, while Iheanacho who played his 17th league game of the season was substituted in the 76th minute with Foussane Diabate coming on for him.