Super Eagles forward Victor Moses was one of four key players who modelled Chelsea’s new home kit for the 2018/19 season.

The new kit was announced on Chelsea’s official website on Friday.

The other three players who also modelled the new kit were Eden Hazard, Cesar Azpilicuerta and Willian.

A statement on Chelsea’s website on the kit launching reads: “The new kit takes inspiration from the famous and much-loved jerseys of the 1980s and 90s. Flashes of colour light up the shirt, with dazzling horizontal red and white lines vibrantly standing out against the famous Chelsea blue. The jersey is complemented by the traditional blue shorts and white socks, brightened by a horizontal red and blue trim at the knee. 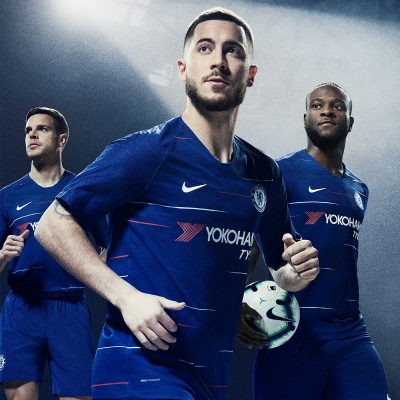 “Meanwhile, two subtle inner pride features ensure this kit is fulsome with Chelsea pride and heritage. High up on the back of the neckline of the shirt sits a small lion, an instantly recognisable symbol borrowed from the club crest. Inside the jersey, the words ‘Blue is the Colour’ can be found, the opening line from the Chelsea anthem.

“As well as the men’s team, both the Chelsea Academy and Ladies teams will wear the new kit throughout the 2018/19 season.

“The new kit will be worn for the first time this Sunday 13 May in our final league game of the season against Newcastle and is available at nike.com/chelsea and the Stamford Bridge Megastore now.”