The 27 year old Nigeria international made his 10th EPL appearance of the 2017/18 season for Chelsea in Tuesday’s 3-1 win over Huddersfield Town at the John Smith Stadium.

Moses has featured for Crystal Palace, Wigan, Chelsea, Stoke City, Liverpool and West Ham in the EPL and has made 67 appearances for Chelsea in the EPL having made his debut against Sunderland on February 6, 2010. 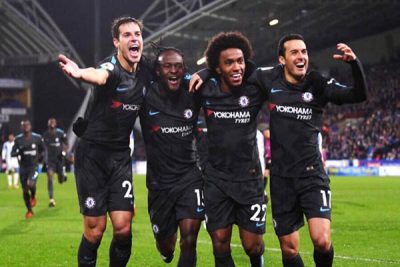 The BBC African Footballer of the Year and CAF African Player of the Year nominee tweeted after Chelsea’s 3-1 win over Huddersfield Town on Tuesday, praising the character of his teammates in earning the win after their defeat to West Ham last Saturday.

Moses tweeted via his official Twitter handle @VictorMoses: “Great character from the lads to bounce back tonight! big win! honoured to have made my 200th Premier League appearance too 💪🏿⚽️✅ #CFC.”

Chelsea host Southampton at Stamford Bridge in their next game on Saturday.