Moses played for 90 minutes while Iwobi was in action for 80 minutes.

Moses made two crosses inside the Arsenal box in the first minute and 13th minute but there was an injury scare for the Nigerian international after a knee collision with Arsenal’s Alexandre Lacazatte left the Super Eagles star requiring treatment.

Iwobi made a key pass in the 15th minute which Hector Bellerin crossed but Danny Welbeck’s header was off target.

With five minutes to go in the first half, Aaron Ramsey worked his way into the Chelsea six yard box but his shot which bounced off the foot of the post was miscued by Lacazette on the rebound.

Arsenal’s Alexis Sanchez came off the bench in the 65th minute in place of Lacazette before Shokdran Mustafi’s 75th minute goal was ruled off correctly for offside. 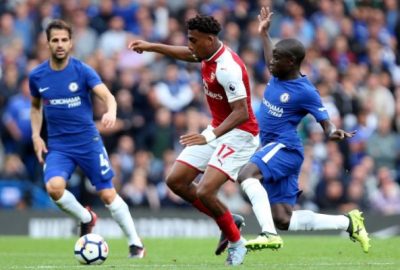 Iwobi was replaced 10 minutes to the end of the match by Mohamed Elneny.

David Luiz was then shown a straight red card for lunging into Saed Kolasinac with three minutes left on the clock, the third consecutive match against Arsenal in which a Chelsea player will be sent off.

Chelsea have won seven of the last eight matches against Arsenal at Stamford Bridge although the Gunners were victorious in the English FA Cup final on May 27 and in the Community Shield on August 6.

Chelsea remain third in the table with 10 points while Arsenal are 12th on seven points.