Super Eagles star Victor Moses came on for the last ten minutes as Chelsea kicked off their 2018/19 season with a 3-0 away win over Huddersfield Town at the John Smith’s Stadium in Saturday’s English Premier League games, reports Completesportsnigeria.com.

Moses came on for Rodriguez for his 219th appearance in the EPL. He has scored 20 goals and provided 18 assist since he made his debut in 2009/2010 season with Wigan.

First half goals from N’Golo Kante and a penalty from Jorginho on the stroke of half time gave Maurizio Sarri’s side a bright start before the break.

Pedro Rodriguez wrapped up the win for Chelsea in the 80th minute finishing off a pass from Eden Hazard to send the Blues to top of the EPL log on goal difference on Saturday.

Kante gave Chelsea the lead, slicing Willian’s cross past Ben Hamer in the 34th minute before Jorginho doubled the lead from the spot with a cheeky penalty after Marcos Alonso was fouled in the box.

The Blues continued their dominant display and got their third goal ten minutes from time with Eden Hazard running through the Huddersfield’s midfield and defence before laying a pass for Pedro to score from close range.

At the Vicarage Road, Isaac Success came on in the 74th minute for Andre Gray in his 20th EPL appearance for Watford who began the new season with a 2-0 win over Leon Balogun’s Brighton Hove Albion. 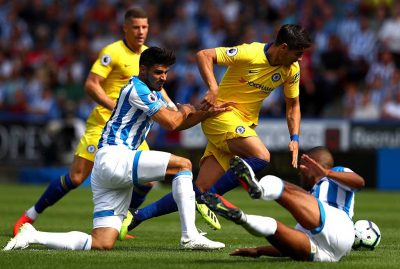 Balogun was benched for the entire duration of the game. A brace from Roberto Pereyra handed the Hornets a comfortable win against the Seagulls.

At the Vitality Stadium, goals from Ryan Fraser and Callum Wilson handed AFC Bournemouth a 2-0 win over newly promoted EPL side Cardiff City while Crystal Palace defeated Fulham 2-0 in a London derby at the Craven Cottage.

A goal in each half from Jeffrey Schlupp and Wilfried Zaha secured a win for Roy Hodgson on his return to his former club.