Although Mourinho did not aim his attack at specific individuals, he was quick to criticise the fringe squad members who were given a runout against the Seagulls.

The Portuguese made six changes for the match, giving the likes of Anthony Martial, Marcus Rashford, Marcos Rojo and Matteo Darmian game time.

“It was not good enough,” Mourinho told reporters after the game.

“The players that replaced others did not perform at a good level and when individuals do that it is difficult for the team to play well. Maybe now you will not ask me why A, B and C do not play so much.

“I knew what was going to happen and I told them, but that is what we got. 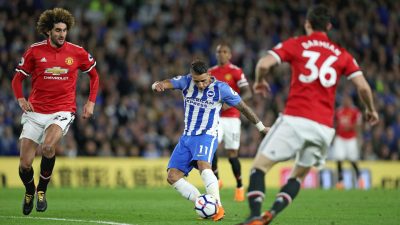 “The attitude from the first minute and especially in the first half, they had more appetite. I did not succeed in persuading my players that getting four more points is important. it is for me, but perhaps not for them.

“I wouldn’t say disappointed. I know them. I thought that the possibility to start the game and give reason would give them something. You have the answer now when you ask ‘why always [Romelu] Lukaku?’. We are probably not as good as people think we are individually.”

Manchester United remain second in the league table following their defeat on the South coast.