Mourinho: Leicester Were Strong But We Coped Well For An Important Win A goal in each half from Paul Pogba after 72 seconds and another striker off the boots of Luke Shaw in the 83rd minute handed Manchester United their first win of the 2018-19 Premier League season despite a late consolatory goal from Jamie Vardy.

“Mr Scudamore must be happy, it’s a good way to start the Premier League,” Mourinho said in his post match interview. 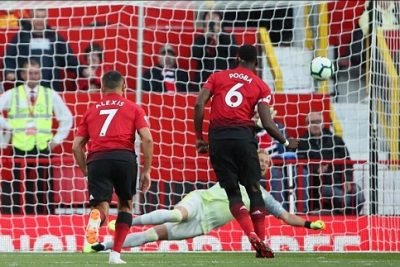 “A good match. A match where I needed six changes not three. I want to play Martial but I can’t, Paul Pogba can’t play 90, Fred the same. I need more changes.”

“It was not easy to manage the game from the touchline. But I told the players we had good periods, lots of glimpses of the type of football we wanted to play. Leicester were strong in periods but we coped with that as a team.”

“The team played as a team. In the second half I had Andreas Pereira and Fred with a yellow card, Paul was fantastic his contribution was amazing, but the fuel was disappearing.

“We were in trouble. Martial in the last 20 minutes could have given us the second goal but I couldn’t make that change. The players gave everything, they gave what they had. Everybody did that.”

“We played well in periods against a good team that invested more than us.

“We must get used to teams who have players of the same quality that we have. Every team is a good team, forget the name, forget the history, forget the shirt.

“It will be a difficult season for everybody, not just for us. I had my plans for many months and I find myself with the market closed in a situation I did not think I would be in. It’s the last time I speak about it. It’s over, the market is closed.

“We have to wait until the end of November to understand if we can fight for the title.”

He also praised Shaw, who was on target in the win.

“I am very pleased for Luke Shaw. He made one mistake in 90 minutes, he was very good defensively. He had a good pre-season.”