Manchester United manager Jose Mourinho says he is delighted with the maximum points and quality of performance from his side, particularly with Paul Pogba, in their 4-1 comeback win over Newcastle United on Saturday.

Goals from Anthony Martial and Chris Smalling in the first half and other strikes from Paul Pogba and Romelu Lukaku in the second half ensured Dwight Gayle’s 14th minute opener counted for nothing as the Red Devils set a new record of 38 games without defeat at Old Trafford.

“I am pleased for the three points, the quality of our performance after Newcastle’s goal, that mentality to react without panic and in a positive way, and obviously the return of injured players is always nice, especially in Zlatan Ibrahimovic’ case. His was such a dramatic injury. To see him back is a great emotion,” Mourinho told BT Sport after the game. 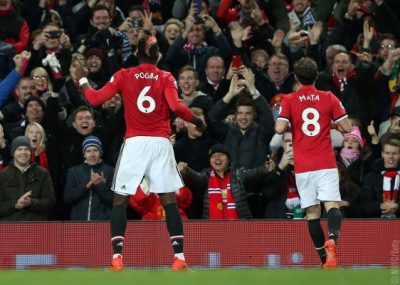 “Paul Pogba is different class – Paul and Nemanja Matic grew up together at the start of the season and are the engine of the team. It was in Paul’s hands, how many minutes to play until he began to feel fatigued. It was a great performance from him.

“I know that strikers depend on goals for confidence and happiness. I was really happy to see him (Lukaku) score his goal.”

United are eight points behind leaders and neighbours Manchester City in the Premier League table but Mourinho is not losing sleep over the gap.

He added: “We go match to match – we can only play Manchester City twice in a season. In those games we will try to take points – outside of those fixtures we are not in control.”