The African champions are currently holding a training camp in Atlanta, Georgia and will face Argentina, Australia, and Turkey in Group B of the 16-team FIBA World Cup billed to take place in Spain from September 22 to 30.

As the only remaining member from the Nigerian female basketball nqtional team that featured at 2006 FIBA Women’s Basketball World Cup in Brazil, Muhammed is confident the new crop of players in the team can surpass the feat of their predecessors.

“Nigeria is going to change the history of African basketball in the World Cup, would that be easy? The answer is No but with the talent of players and the experience we have on the team, we can accomplish the mission,” the 32-year-old power forward told Fiba.basketball.

“The draws are favourable. We have a very good chance of topping our group and proceeding to the next level to win and win until we seize the trophy.

“I believe if we play together as a team just like we did in Mali [at FIBA Women’s AfroBasket 2017], we would be victorious. 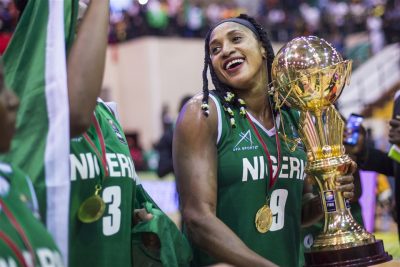 “Secondly, most of us have played at the higher level of basketball around the world with the top players. We even have played with some of them on the same team and also played against some of them at the top leagues.

“It’s not going to be that easy to play against the top players in the World Cup because they have a lot of experiences and most of them have been playing together for much more longer than this new team that we have as of now.

“Our goal is to win the championship and bring it back home with us.

“l am looking forward to helping and contribute to the team with my experience and as a player who’s representing my country, Nigeria. I’m going to use this chance to make sure our team would stand unshakable and competitive against any other team.

“It’s going to be fantastic and an opportunity for us as athletes to honor our country once again in the World Cup where there are going to be many people around the world watching.

“I think every generation of Nigerian players has done or contributed their absolute best to the country and we all have a common goal which is the victory.”