By Adeboye Amosu:
Super Eagles forward, Ahmed Musa, is in cloud nine after getting a goal for Al Nassr in their 5-1 win against against Al Hazm in a Saudi Professional League clash on Friday, Completesportsnigeria.com reports.

Musa scored the opener for Al Nassr Riyadh in the 26th minute of the encounter, his fifth goal of the campaign for the club.

The game was his fifth league start of the season since he joined Al Nassr from English Premier League side Leicester City this summer. 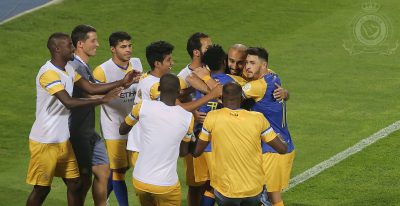 Musa took to Twitter to express his joy on his latest scoring feat and thanked his teammates for their efforts.

“Well done mates.Happy to get a goal 🥅 let keep the hard work going👍🙏💪💙💛,”reads the Tweet.

Musa is now expected to head back to Nigeria for the Super Eagles’ crucial 2019 Africa Cup of Nations qualifying double-header against Libya.

The Super Eagles will host the Mediterranean Knights on Saturday October 13 at the Akwa Ibom International Stadium, Uyo with the reverse fixture slated for Sfax, Tunisia, three days later.

Musa is expected to lead the Super Eagles in the game in the absence of skipper of the team, John Mikel Obi.