MY WORLD CUP STORY – SHORUNMU: Why Westerhof Dropped Me From US ’94 Squad You all know my story and how I eventually made it to the World Cup in Korea/Japan in 2002.

I was the youngest goalkeeper in the Super Eagles in 1994 where we had Peter Rufai, Alloy Agu and Wilfred Agbonibare. Clemens Westerhof was the coach then. We were all committed and in good shape for the World Cup and it was very difficult for Westerhof to drop any of us from the team.

But we all knew he could only go with three goalkeepers and he had to call me to his room and told me that as the youngest goalkeeper in camp, he would not take me to the 1994 World Cup but I had a great future with the team. Well the rest is history. 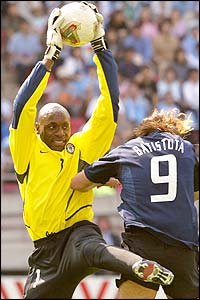 Another opportunity came in 1998 for the World Cup in France, after trying all my best in camp and it was sure I would make the team, I sustained an injury just about a month to the World Cup and that was how I missed it again. That was very painful but I am not wiser than God, he knew why it was so.   And finally, I made it in 2002 at Korea/Japan and I really thank God for that.