World number one ranked tennis men’s player Rafael Nadal and tennis legends, John McEnroe and Thomas Borg, have hailed the competitiveness of the maiden edition of the Laver Cup which started in the early hours of Saturday in Prague.

The Laver Cup is an international indoor hard court men’s tennis tournament between two teams: Team Europe and Team World. Team World is composed of players from non-European countries. Held annually (except for Summer Olympic years), the tournament will occur two weeks after the US Open, with more points awarded for wins as the tournament progresses.

The tournament is named after Australian tennis legend Rod Laver.
Nick Kyrgios led the World team to their only success on the opening day of the Laver Cup, joining forces with American Jack Sock to beat Europe’s pair of Rafael Nadal and Tomas 6-3 6-7 1-0 (10-7). 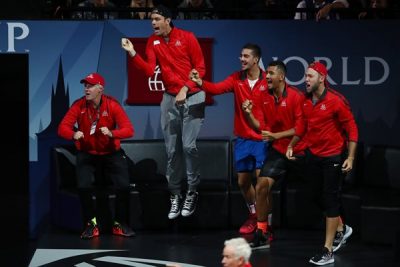 Marin Cilic, Dominic Thiem and Alexander Zverev were in action for Team Europe coached by Bjorn Borg in the match.

“The first set they were better than us, but later it was close. We started to return more and be more aggressive, Nadal said.

“All the rivals are good and, as you saw today, all the matches decided in a few balls.

Team Europe coach Borg said about the atmosphere on the opening day:

“Like golf, tennis is largely an individual pursuit which is what makes team events in our different sports so appealing.”

World number two Roger Federer however sat out the opening day but was giving words of advise to the younger players.

“I’m hopeful that this is going to be successful and force some people to take a good, hard look at the rest of the schedule. With Davis Cup they need to make some changes,” captain of the world team McEnroe said.