By Johnny Edward: Nigerian star Al-Farouq Aminu played his first National Basketball Association (NBA) game for the Portland Trail Blazers after a long lay-off in Friday morning’s 91-103 defeat to the Milwaukee Bucks and his coach Terry Stotts is delighted to have ‘the Chief’ back in his squad.

D’Tigers star Aminu returned to action after missing 13 games with a sprained right ankle to finish with six points and five rebounds in 22 minutes in his ninth NBA game of the season.

“The little run that we had in the first half, he made back-to-back threes. I thought physically he looked fine. 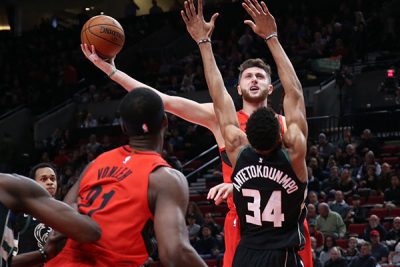 “He (Aminu) didn’t seem to be favoring his leg at all. His conditioning seemed like it was good. We were going to keep him at 20 minutes but we were able to go over a little bit; if we had gotten it close, he probably would have finished the game so that was a positive.”

The Portland Trail Blazers will hope to bounce back to winning ways when they host the New Orleans Pelicans Saturday night at the Moda Center.