Wilfred Ndidi says Leicester City’s Premier League trip to the Emirates Stadium could have been so different if key moments went their way.

The Foxes took a deserved lead after Ben Chilwell forced an own goal from Héctor Bellerín in the 31st minute, but lost their lead before half-time.

Following Mesut Özil’s equaliser, Arsenal began to assert more dominance in the game and, despite Ndidi’s header coming back off the bar, Pierre-Emerick Aubameyang’s brace sealed the points.

Ndidi insists that the Foxes who also had a penalty appeal turned down by referee Chris Kavanagh in the first half, can return to the East Midlands with positives to reflect on.

“I would say it’s a bit disappointing in the second half, we did our bit in the first half, we did really well,” the Nigeria international told LCFC TV.

“It’s not just about looking at the first half, we need to develop the second half and go from there. It was a tight game. When we conceded the second and then the third, everything just didn’t go our way. 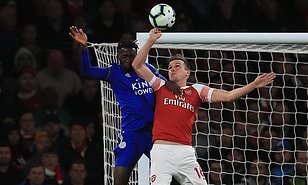 “If we’d have got the penalty and then the ball hadn’t hit the crossbar everything would have worked perfectly for us. We just look forward and take confidence into the next game.”

Ndidi admits that Özil’s 45th minute leveller disrupted Leicester’s flow, but says signs of progress are there for Claude Puel’s men, who deployed an effective 3-5-2 formation.

The 21-year-old added: “That really grumbled us but I think we did our bit in the first half, if we had stayed 1-0 up going into the second half we would have been more confident.

“Everything is going fine, even though we lost we’re getting used to the formation and doing our bit.

“As I said, we take the first half, also the second half we just need to learn from our mistakes and then correct it towards the next game.”