Ndukanma: Why I Ran Away After My Young Busters Beat Rangers in Enugu FA Cup Final Ndukanma had more than 10 years spell at the Coal City Flying Antelopes as a player.

He underwent his practical coaching at Rangers after undergoing coaching training at Nigeria institute for Sports, (NIS) Lagos and obtaining his CAF C coaching licence. He was in charge of the seven-time champions’ B team until early this season when he joined the modest Nationwide League side.

The Crime Busters currently sit atop the Group D2 of the Nationwide League One (NLO) and have not lost a match in six games.

They reached the Enugu State FA Cup final for the very first time this year and made history. They became the first team to deny Rangers the state FA Cup title in close to two decades with a shock 2-1 comeback win.

Completesportsnigeria.com reports that with scores at 2-1 in favour of the Police team and heading into the added time, Ndukanma sneaked out of the dugout and went into the dressing room. He was conspicuously missing during medals and trophy presentation amid the wild celebration that followed the monumental victory of his team.

“I did so out of my respect and love for Rangers who gave me the break in the game,” Ndukanma told Completesportsnigeria.com. 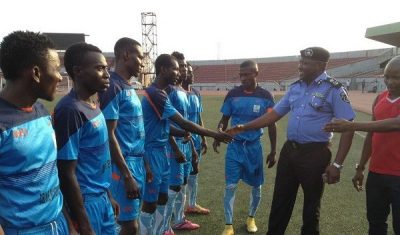 “So that was the reason why I did not celebrate the FA Cup win of my young team at the expense of Rangers.

“It is not often that a player or coach celebrates after helping to defeat his former club.”

“I did so to show my respect for the club that I played for in more than 10 years, and even coached their B team.”

Ndukanma has guided the Nationwide League One side to the top of the log and now stands a bold chance of earning a promotion to the Nigeria National League (NNL) after the playoffs.

He added: “We have not lost any match in six league games so far. We’ve won four games, two at home and two at away.

“We have also drawn two on the road. Our target is to get promotion to the NNL and I must congratulate my players for their hard work and dedication as well as their ability to grasp and translate our coaching philosophy into reality especially during the FA Cup win.

“I must not also commend my backroom staff and the Team Manager of the club, Superintendent of Police, SP Ebere Amarizu who is always available for us on logistic and welfare matters.”