Neymar: How My Poor Parents’ Lack Of Money To Buy Cookies Fired Me Up To Become Rich Footballer Brazil star Neymar has opened up on the struggles of his upbringing and revealed how a lack of cookies gave him motivation to become a rich and successful footballer.

Daily Mail takes up the story after the super rich Juventus Superstar narrated his story to a YouTube channel.

The world record signing, who joined Paris Saint-Germain from Barcelona for £198million, was once in an environment where every penny counted and food was in scarce supply.

And in an open and honest interview with YouTube channel O Primo Rico, the PSG forward recounts one particular story about being owed cookies from his mother and how that fuelled a fire inside him to become a rich and successful player.

He said: ‘There’s a story with my mum and I think most people know it. I really wanted to eat cookies but we didn’t have any, so my mum said: “Son we don’t have more money, there’s no way. I’ll owe you this week, maybe next week when dad gets his payment, we can buy it. 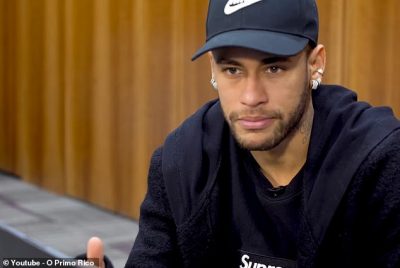 ‘At the same time I told her, “mum it’s OK. One day I will be very rich. I’ll buy a cookie factory so I can eat whenever I want.”

‘My mum cries when she tells that story because it was really touching for her.’

Neymar quickly honed his skills and began to attract lots of attention as a teenager in his home country. It didn’t take long before European scouts took an interest.

‘I think it was by the time I was 14 or 15 years old that I realised I wouldn’t lack anything anymore if I did things right, if I had my parents take care of everything.’

Life has transformed these days for the 26-year-old as he lives a lavish lifestyle and mixes with the rich and famous on a regular basis.

Neymar is currently chasing a Champions League title with PSG having been brought in to spearhead the Ligue 1 side to European success.

The club have been pitted against Manchester United, a side with renewed belief after the appointment of interim boss Ole Gunnar Solskjaer following the sacking of Jose Mourinho.