By James Agberebi: The Super Eagles of Nigeria moved up three places from 44th to the 41st position in the latest FIFA Coca-Cola World Rankings released on Monday, Completesportsnigeria.com reports.

The latest ranking, which was published on FIFA’s official website, places the Super Eagles in the fifth position in Africa.

The Eagles’ recent rise is as a result of their qualification for next year’s FIFA 2018 World Cup in Russia following their 1-0 win against Zambia on 7 October.

Algeria who will host the Eagles in their Group B last qualifying game in November dropped five places from 62nd to 67th.

Cameroon and Zambia who are also in the Eagles’ World Cup qualifying group rose from 45th to 42nd and 78th to 77th spots respectively. 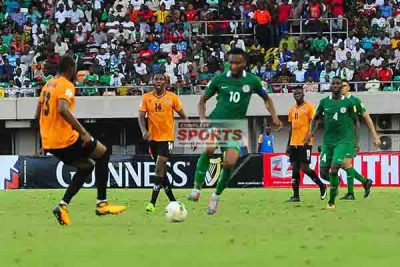 Seychelles, who will host the Eagles on matchday two in Group E of the 2019 Africa Cup of Nations qualifiers next year, improved in the rankings as they climbed from 190 to 188.

Bafana Bafana of South Africa who beat the Eagles 2-0 in Uyo on matchday one of the 2019 AFCON qualifiers, moved up from 80th spot to 74th, while Libya, also in Group E, dropped from 81st to 87th.

Meanwhile in the top 10 ranked teams, Germany are number one, Brazil are number two, Portugal are in third position, Argentina in fourth and Belgium fifth.