LaLiga has unveiled its new headquarters with an official event attended by a range of dignitaries, diplomats, LaLiga Santander and LaLiga 1|2|3 club presidents, competition sponsors, LaLiga ambassadors, and other representatives of Spanish sport.

After more than 25 years at its long-standing headquarters at Calle Hernandez de Tejada 10, LaLiga continues to grow by moving its head office to Calle Torrelaguna 60 in Madrid, marching onwards to a new “stadium” where the association’s workforce can carry on working day in, day out for the benefit of the clubs, and on the internationalisation of professional football in Spain.

The new LaLiga office provides a new home for all of those people who share this great, and undying passion for football. They feature modern open spaces with a design inspired by the history, legends, and values of the Spain as a nation. The philosophy underlying the “stadium” is based on the idea that there is no heart without a heartbeat, there is no passion without heart, there is no emotion without passion, and without emotion football simply would not be football.

Nigerian Ambassador to the Kingdom of Spain, Her Excellency Chief Mrs. Bianca Odumegwu-Ojukwu, was present during the ceremony on Tuesday.

The attendees at the ceremony showcasing the international emphasis of LaLiga also included the minister of foreign affairs and cooperation, Alfonso Dastis; the president of the High Council for Sport, Jose Ramon Lete; and the high commissioner for the Spain Brand, Marca España, Carlos Espinosa de los Monteros.

LaLiga president, Javier Tebas stressed during the event that “these new headquarters represent a giant stride towards our goal of becoming a leading global entertainment company, by creating experiences and allowing the fans to form part of the story in a different way”. 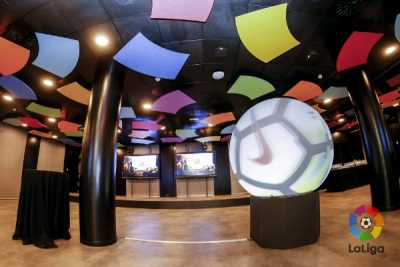 Meanwhile, the minister of foreign affairs and cooperation said: “The fact that the level of professionalization seen in Spain in recent decades, both in sporting and organisational terms, has permitted LaLiga to compete neck and neck with the best for some time now, not just with the other leagues, but also with other time-honoured sports competitions such as the NBA, and even the NFL”.

Shortly before the opening ceremony, the attendees visited the spaces in which LaLiga will occupy in the new building, getting a close-up view of each of the different areas where LaLiga will carry out its work on a daily basis. Furthermore, they got to enjoy a two-Michelin-star cocktail menu thanks to the creations of the Spanish chef, Ramon Freixa.