‘Nigerian Nightmare’ Kamaru: I’m The Most Dangerous Guy In My UFC Division The Nigerian Nightmare, Kamaru Usman, speaks to TUNDE  KOIKI on Sports Planet ahead of his Mixed Martial Arts (MMA) fight with legendary Jujitsu maestro Damien Maia of Brazil on Saturday, 19th May...
Sports Planet: Who is Kamaru Usman and how did you get into the Ultimate Fighting Championship (UFC)?
Kamaru Usman: I’m Kamaru Usman, born and raised in Auchi, Edo State, Nigeria. I moved to the USA with my family at the age of eight. While growing up in the USA in high school, I followed wrestling and through it, I developed a passion for the combat sports and eventually went to college to wrestle.  And after college, I wrestled for a couple of years on the Olympic circuit and after that it was just a natural progression and I thought the next biggest thing to accomplish was MMA.
SP: You look like a superb athlete. You could have taken up just about any sport. Why MMA?
Kamaru: I couldn’t do anything else even when I was in high school. My dad was urging me to play baseball and of course being from Nigeria, soccer was the number one sport where everybody wanted to play. But there, there is baseball, American football, basketball, track and field which I love but it was just something about wrestling, something about the combat aspect of it and the fact that it was one on one; it was what my hard work was going to take me to the top, it wasn’t what anybody else was doing to do for me, it was what I was going to do. I had the ability to really control as much of the outcome as I could. With wrestling, I just want to compete in the sport which is what MMA is all about. And the reason why I went for MMA was because I liked boxing but at that time MMA was already big and it was time for me to go into it and I just didn’t want to forget the skill that I developed in the last 10-12 years with wrestling which happens to be the hardest sport to learn. So, I wanted to continue to use that skill, which was why I decided to go for MMA. 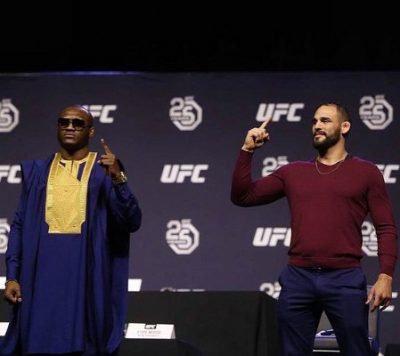 SP:  How would you describe your journey in the UFC so far and how did you come about the moniker “The Nigerian Nightmare”?
Kamaru: Actually, in the UFC so far, it’s been tough because you always want to fight the best guys to elevate your status, elevate your ranking so that you can eventually fight for the world title. With me it’s being tough because it’s been hard for me to get those guys above me to step in and challenge me and fight me because they know that if they go up against me, they would come out victorious, so a lot of those guys try to maneuver around and not fight me, which has been frustrating. But the nickname “The Nigerian Nightmare” is something that Nigerian professional athletes have all tried to basically bring just glory and representation to their nickname because that nickname signifies excellence in professional sports. And there have been few Nigerian nightmares in sports while they were at the top of the sports and they were the symbol of excellence in their sport at that time. You had in boxing Samuel Peter in American sport, in football Christian Okoye, American football player; those guys were excellent and now I am the new ‘Nigeria Nightmare’ to bring glory and excellence to that nickname in combat sport.
SP: After you won your last fight, in the post-fight interview, you were proudly flying tour “Naija” roots. Whereabouts in Nigeria are you from and how close are you to your Nigerian roots?
Kamaru: As I said earlier, I’m from Auchi in Nigeria. My mum is from Esan and my Dad is from Etsako and my family is also spread out in Lagos, Benin and all over the place. But I’m very close to my Nigerian roots. I could remember everything because I was born and raised there; my parents are full-fledged Nigerian, I still speak pidgin to them up till now. So, I’m very close to my Nigerian roots because it is a place where I’m proud to be from, it is something that gave me the heart and kind of shape that moulded me into the man that I am today, so I am going to represent Nigeria more and more.
SP:  Let’s talk about the welterweight division of the UFC. You have persistently called out “monsters” like Rafael dos Anjos, Rory McDonald and even champion Tyrone Woodley. You seem to be in a hurry. Don’t you think you should gradually work your way up the rankings?
Kamaru: I’m not in a hurry. I have been working for a long time. And when you’ve been working for a long time, it is something that my dad told me, when you don’t know yet, you have to sit back, close your mouth, listen, learn and work. Once you do it that way, it’s time to make headway because then you are not wasting your time. I’m not getting younger; I close my mouth, open my eyes and my ears. I have learned, I have listened and I have seen all. I know what I’m capable of achieving without wasting my time so I’m ready for those guys now. I’m very ready for those guys which is why said so. Four years ago, I didn’t say anything like that but now I’m very ready for them. 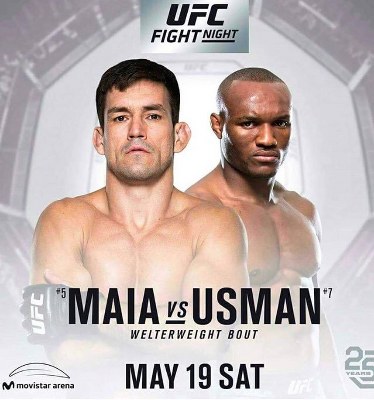 SP:  Your next fight is in Santiago, Chile where you were supposed to fight Santiago Ponzinibbio who has pulled out due to injury. His replacement is a man regarded as one of the greatest grapplers in MMA history, Damien Maia of Brazil who is ranked no 5. I know they say styles make fights, but surely you gotta admit that this is a tougher fight. How prepared are you for Maia and how confident are you of getting a win?
Kamaru: Yes, it’s going to be a tougher fight. I knew Damien Maia is a tough fighter. I asked for the fight because he was a tough fighter and nobody wanted to fight him. But I have stated before I believe I am the most dangerous grappler in the division. Maia is a tough guy truly, throughout the history of UFC, he has been the most dangerous grappler in the division but it’s a new day, a new age, but I am the new guy in the division. I’m the most dangerous guy in the division, everybody knows that and if he can do what he does best, he has no chance to win the fight. My confidence is very high because I’m not one of those guys who have false confidence. I have confidence because I put in a lot of effort; I work in the gym, I put in the time, I put in a lot of effort in the gym and I know that I would come out victorious by God’s grace.
SP:  MMA is a tough sport for tough men. We see the fierce battles, the blood, the Spartan training sessions. Just how challenging is it to enter and stay relevant in this sport?
Kamaru: MMA is a superbly tough sport; I don’t think people really understand how tough it is. I think people see us on TV and say I can do but they don’t understand how tough it is. The moment you see us on TV is just the glorious moment. The job is being in the gym training, learning new and different arts of fighting every day, learning wrestling, striking, kick-boxing, learning other aspects, putting it together all the while in training to prepare for just that 15-25 minutes you are going to see us on TV. It is a very tough sport and the sport keeps changing so fast. It is just the level of hard work I have put and how blessed I have been to be able to stay here at this moment. 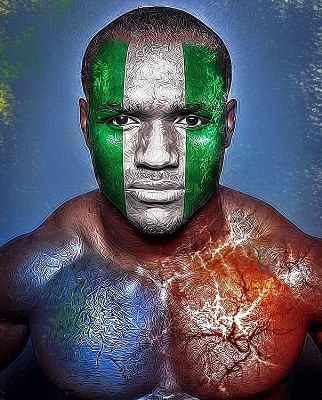 SP:  You describe yourself as “a problem in the welterweight division”. Where do you see yourself in this sport in the future?
Kamaru: Yes, I describe myself as a problem because I am the problem. I am the guy in the division that nobody else wants to fight; nobody else can see a win within the fight. I can out-grapple anybody, I can out-strike anybody and I may say that I’m better than anybody in the division. So, that is why I’m the problem in the division and everybody knows that. I believe by the end of next year, the belt will be mine. I will be the welterweight champion; if not the end of this year, by the end of next year.
SP:  It seems MMA and the UFC have come to stay. We have big, strong and tough men back here in the motherland. Do you think we will have more Nigerians following in your footsteps someday? Or could we even see a UFC Africa circuit that will include Nigeria someday?
Kamaru: Absolutely. I believe one of the biggest aspects or one of the biggest reasons we have not been to get as many of them is just the access. Africans (Nigerians) have not been able to gain access to the trainings so as to have our eyes open to the sport because this is a sport that is made for us Africans. If there is one thing that Africans know how to do, it is how to fight. We fight to survive everything everyday and now you are telling us this is the way for us to fight for better life, to improve our living conditions, that is something that is meant for us Africans. And yes, I believe, by the time I am done, I would want to open so many eyes to where Nigerians and Africans all over the world would know that we can do this as well.
SP:  Finally, ahead of your big fight, do you have any words for your fans over here in Nigeria?
Kamaru: Nigerians, I know some of us might not know all the details of the sport but it is the fastest growing sport in the world and I am here to represent us to the fullest. I am here to carry this flag to the highest level. I have already said it, Naija, everybody knows “ we no dey ever carry last”. I have said it and I would continue to say it.
SPORTS PLANET is a news and magazine radio sports show produced by COMPLETE SPORTS STUDIOS. You can listen to it on our partner stations on Mondays, Wednesdays and Fridays. You can also listen to past episodes, including this interview with Kamaru Usman on our Podcast. Download the Stitcher Radio Podcast app on your mobile phones and search for Sports Planet to listen. 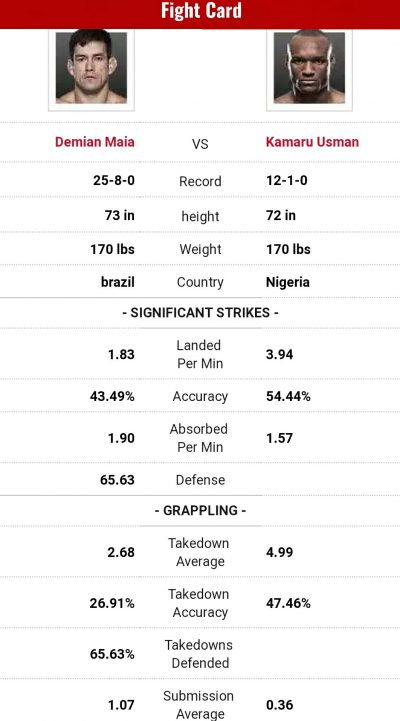