Tottenham Hotspur were forced to a 1-1 draw away to Southampton at the Saint Mary’s Stadium in an English Premier League clash on Sunday.

Southampton got off to a flying start in the encounter with Davinson Sanchez scoring an own goal in the 15th minute.

The Colombian international turned a cross into his own net to hand hosts Southampton the lead.

But the celebration was shortlived three minutes later when Harry Kane restored parity for Tottenham scoring the equaliser with a header.

The goal was his 99th English Premier League goal ever and his 21st this season.

The result means Tottenham are unbeaten in their last 12 games at Saint Mary’s Stadium while Southampton have now failed to record a win in their last 11 EPL games this season.

In the second half, Spurs came close to taking the lead through Dele Alli but his effort was saved by Michael Vorm in goal for Tottenham.

Kane, Heung Min Son all came close scoring for Spurs but their attempt was saved by Fraiser Forster.

Nigerian-born teenager Michael Obafemi was handed his Southampton debut as a substitute and he nearly marked it with the winner, not properly connecting after a cross was driven into the Spurs box with the net gaping. 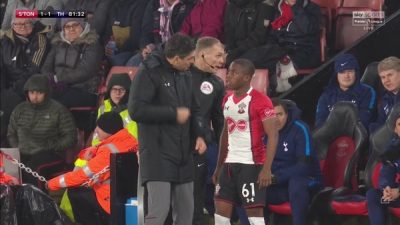 At 17 years and 199 days Obafemi became Southampton’s second youngest player to appear in the Premier League after Luke Shaw.

The result moved Spurs to fifth place in the EPL table with 45 points from 24 games, three points ahead of London rivals Arsenal.

Simon Nominated For Nantes MOTM Award After Win At Marseille