American sportwear makers Nike have claimed that they have received in excess of three million orders for the new World Cup jerseys of the Super Eagles.

The jerseys were unveiled in February but are still not available on general sale.

At a meeting with Nigeria Football Federation executives at Nike’s Europe headquarters in Amsterdam, Netherlands, the sportswear company also announced that the much-anticipated release of the jerseys into the global market would happen on Tuesday, 29th May, at a the cost of $85 (about N30,000).

Both organizations used the opportunity to appraise their running partnership agreement, signed in London three years ago, and while both expressed satisfaction with the contract performance, the imperative of penning a new, improved contract was high on the agenda.

“The meeting was at the instance of Nike. The company’s representatives at the meeting expressed delight with the performances of the various national teams since they came on board and we both agreed that it was time for a much bigger contract. That would be actualized very soon,” Dikko told thenff.com. 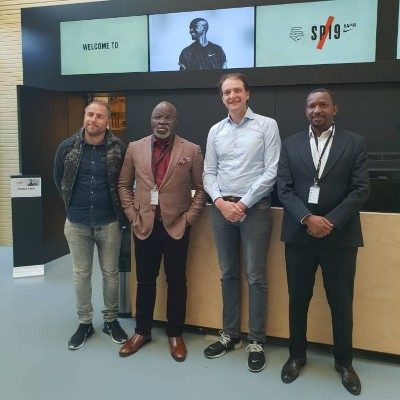 “The new Super Eagles’ jerseys will be released into the global market, including several NIKE shops across Nigeria, on 29th May 2018, just before the Eagles fly out to London for the friendly match against England. The cost would be $85 for one.”

In the three years of NIKE’s initial sponsorship agreement with the NFF, the U-17 national team (Golden Eaglets) have won a fifth FIFA U17 World Cup; the U-23 National Team (Olympic Eagles) have won bronze at the Men’s Olympic Football Tournament; the senior women’s national team (Super Falcons) have won an eighth Women Africa Cup of Nations; the Super Eagles B have achieved a record runner-up position at the African Nations Championship and; the Super Eagles have qualified for the Russia 2018 FIFA World Cup (Nigeria’s sixth appearance) from a so-called ‘Group of Death’ in the African series.

“In our discussions, we explored a lot of possibilities going forward. We talked about the forthcoming FIFA World Cup finals in Russia and the preparation of the U-20 girls (Falconets) for this year’s FIFA U-20 Women’s World Cup in France, among other issues,” Dikko added.