NO MARGIN FOR ERROR: How Super Eagles Should Line Up Vs Iceland The Super Eagles are hours away from their second group game against Iceland at the Russia 2018 FIFA World Cup. Completesportsnigeria.com’s JOHNNY EDWARD picks who best fits in a potential 3-4-3 formation for the crucial game in Volvograd on Friday…

Since his debut for Nigeria in their 4-2 international friendly win over Argentina last November, the 19 year old has continued to grow in confidence and composure in goal for Nigeria. Though he has kept only one clean sheet in six starts (seven appearances in all) for Nigeria, Uzoho remains the best goalkeeper judging from his performance thus far. Uzoho is poised to be in goal for Nigeria when they take on Iceland as he was barely threatened during the defeat to Croatia.

Shehu Abdulahi was one of the weakest links in the Super Eagles defence against Croatia. The Bursaspor defender was badly exposed by Inter Milan winger Ivan Perisic each time he came up against him in one vs one situations during the encounter. His crosses were poor and he did not offer anything supporting the attack while he was average in his defensive duties. A youthful Tyronne Ebuehi must be deployed as a wing-back to add freshness and pace into the team. 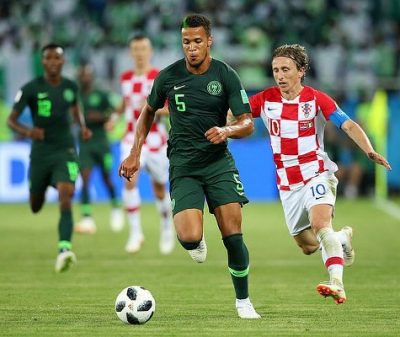 Ebuehi possesses outstanding overlapping skills combined with his ability to get quality crosses into the box. Those qualities made him one of the most sought after full-backs and Benfica handed him a five-year deal at the expiration of his contract with ADO Den Haag where he scored once in 82 appearances. Ebuehi was nominated by VoetbalPrimeur as one of the 10 best right-backs in the just concluded season in the Netherlands.

Bryan Idowu had a quiet debut World Cup appearance for Nigeria playing as a left-back. The Amkar Perm defender fared well playing as a wing-back in the friendlies where he could surge forward and help the attack. His pace up and down the left flank makes him a better option to Elderson Echiejile but he must improve on his crosses when he gets to the byline. The Amkar Perm defender has started in all six games for Nigeria since he made his debut against Argentina last November coming in for Ola Aina.

Leon Balogun and William Troost-Ekong have formed a good partnership playing together in the heart of the Super Eagles defence but have failed to deal with set-pieces in their last four games. The pair have been solid by their standards during the World Cup qualifiers but have faltered during pre-tournament games and on the biggest stage in Russia. Switching to a three man defence with John Ogu deployed at the left-side of the defence will give the team more freedom to build the attack from the back. Also Ogu’s inclusion could also help neutralize Iceland’s height advantage during aerial challenges.

After churning out that outstanding performance for the Super Eagles on his World Cup debut, Oghenekaro Etebo must be the first name on the team sheet against Iceland. The 22-year-old was the most efficient Super Eagles player in terms of his positional play, ball handling and take-ons in the defeat. Despite his own-goal, Etebo has outdone Lionel Messi, Cristiano Ronaldo and Neymar in the dribbling stakes so far in Russia. 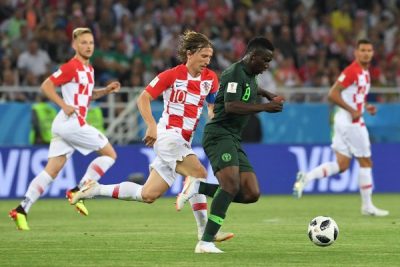 The Super Eagles captain Mikel Obi was one of the poor players Gernot Rohr paraded in the defeat against Croatia. Mikel has lost lots of pace and like everybody has reiterated his best position is playing deep in front of the defence line. But his calmness on the ball and long thrust defence splitting passes are key assets. With his experience, playing behind Etebo will offer the Super Eagles more possession of the ball in midfield and also give room for the Stoke City player to join the attack when the team can break.

Alex Iwobi was anonymous in Nigeria’s 2-0 loss to Croatia while deployed as a winger. But he remains one of the most creative players in the Super Eagles team. If handed the No.10 role against Iceland, the 22’year-old has the quality to unlock defences with his crisp and short passes.

Victor Moses was Nigeria’s only threat going forward in their defeat against Croatia. He will be a good foil for Odion Ighalo who needs good support from the midfield. Moses’ pace, experience and desire to make a mark at the biggest stage will offer the Super Eagles another dimension in attack. 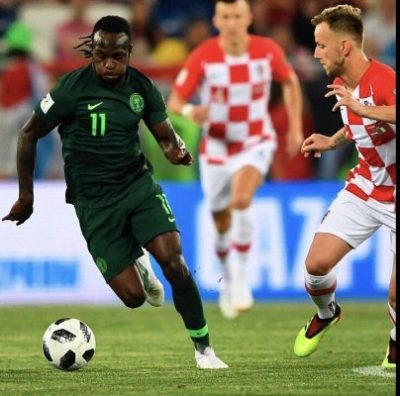 Odion Ighalo has admitted that it is difficult playing as a lone striker. This has been obvious in the team’s last five games he has played because he has been isolated in attack. During his prolific years with Watford in the English Championship and in the English Premier League, Ighalo had a player in Troy Deeney who acted as a foil for him upfront. Playing alongside Victor Moses who is equally pacy and skillful will give Ighalo more room to link up well and create chances to score. Ighalo has not scored in his last seven games for Nigeria.