Solomon Ogbeide’s men sit at the top of the standings with 30 points, five more than Kano Pillars and a win will no doubt boost their title credentials.

Pillars’ will bank on their talisman, Junior Lokosa, who is the leading scorer in the NPFL with 15 goals to lead their hunt for goals in the game.

The hosts will also look up to Samad Kadiri and Austine Ogunye, who have scored 11 goals in between them to get the much needed three points in the game.

Second placed Rivers United also face a tricky road trip
to Lagos where they will confront MFM at the Agege Stadium.

The visitors have won once in eight away fixtures this season and have lost on their last two visits to the ground.

They desperately need to avoid defeat to keep up pace with Lobi Stars in the game scheduled to hold on Monday.

Champions Plateau United will return to league action following their ouster from the CAF Confederation Cup and will confront struggling Heartland at the Dan Anyiam Stadium, Owerri.

Heartland who occupy last position in the table will be boosted by the fact that the Jos Club are yet to earn a point on the road in the NPFL this season.

The Ifeanyiubah International Stadium will host the oriental derby clash FC Ifeanyiubah and Enugu Rangers, while Niger Tornadoes and Yobe Desert Stars will also clash in an all northern affair in Minna.

The Promise Keepers who occupy sixth position but still have three outstanding games to be played are yet to drop point at home this season.

Seven-time champions Enyimba will be the guests of Wikki Tourists at the New Jos Stadium.

Enyimba who are unbeaten in their last six games in all competitions and have drawn their last two away games in the NPFL.

In Lafia, Abia Warriors who are unbeaten in their last seven league games will seek to extend that run when they clash with their hosts Nasarawa United.

Kwara United also have the chance to extend their unbeaten run under coach Abubakar Bala to five games when they host Go Round FC at the Kwara Sports Complex in Ilorin. 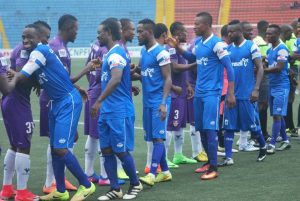