New sensation Junior Lokosa grabbed a brace to increase his goal haul for the season to 14 as Kano Pillars thrashed FC IfeanyiUbah 4-0 in a Nigeria Professional Football League match day 15 fixture at the Sani Abacha Stadium on Wednesday, reports Completesportsnigeria.com.

The young forward put the hosts ahead from the spot on the hour mark and added the second five minutes later.

Nyima Nwagua and Awalu Ali were also on target for the Sai Masu Gida in the game.

Ten-man Lobi Stars continued their impressive run of form as they held Abia Warriors to a 1-1 draw in Umuahia.

Ndifreke Effiong netted the curtain raiser for the hosts in the opening minute, his sixth goal of the campaign.

Lobi Stars were reduced to 10 men in the 50th minute when Chinda Kaka was sent off for a rash tackle.

Umar restored parity for the visitors in the 68th minute.

The Makurdi club maintained their position at the top of the standings with 27 points, three adrift of second-placed Kano Pillars.

At the Nnamdi Azikwe Stadium, Enugu Rangers recorded a 3-0 win against Yobe Desert Stars with superstar musician Flavour among the cheering crowd.

Former Sunshine Stars forward Ajani Ibrahim scored a brace for the Flying Antelopes in the game, while Bright Silas got the other goal.

There was also joy for Rivers United fans as their team defeated Heartland at the Yakubu Gowon Stadium, Port Harcourt.

Emeka Ogbugh netted the curtain for Stanley Eguma’s men seven minutes before the break, while Roland Koffi put the game beyond the visitors with the second goal in the 68th minute.

Relegation battlers Sunshine Stars and Kwara United fought out a 2-2 in Akure.

Stephen Alfred stunned the home fans by scoring the game’s opening goal in the 20th minute.

Sunday Emmanuel grabbed the equaliser in the 38th minute, and put the hosts ahead for the first time in the game a minute after the half hour mark.

Sunday Chinedu ensure the visitors returned to Ilorin with a share of the spoils by grabbing the equaliser in the 72nd minute.

Nojeem Olukokun was on target for the home team, while AbdulBasit Shittu scored Katsina United’s only goal of the encounter. 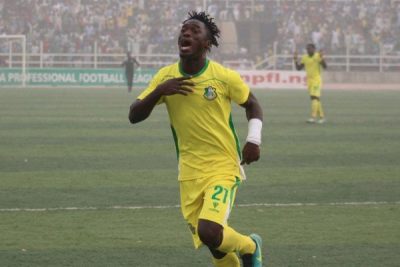