NPFL: Young Coaches, Officiating And Other Talking Points From 2017 Season When Imama Amakpakabo led Rangers to the Nigeria Professional Football League title last season for the first time in over 30 years, some people thought it was just a one off.

But this season, another young coach Kennedy Boboye has proved that there is a new order in the coaching fraternity in Nigeria as he led Plateau United to their first ever league title

Boboye, 43, took over from Zachary Baraje in November, 2016 and in his first season with the Jos-based club, went all the way to win the NPFL title and also clinched a CAF Champions League ticket.

Aside from Boboye, another young, up-and-coming coach who did marvellously well is MFM’s 39-year-old Fidelis Ilechukwu.

Ilechukwu guided MFM to a second place finish in the league and also secured a CAF Champions League for the club for the first time in their history. 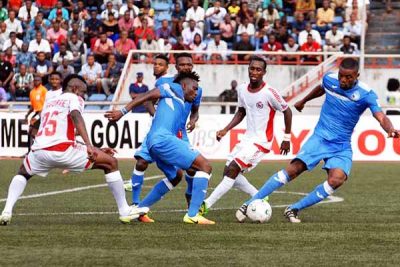 NPFL: Young Coaches, Officiating And Other Talking Points From 2017 Season

THE NPFL IS COMPETITIVE

The last team to have any kind of complete dominance in the Nigeria league was Kano Pillars.

But that seems to have changed as the NPFL is now highly competitive as the last three seasons have witnessed three different winners.

Enyimba halted Pillars’ dominance in 2015 before Rangers ended their over 30 years wait for the title last year. And in the just concluded season, Plateau United lifted their first ever league title.

The just concluded NPFL season witnessed the League Management Company’s zero tolerance for misconduct of players, club fans and club officials and the league body’s swift action to curb it.

One of such instances was the over N2 million fine and suspension of nine IfeanyiUbah players for 12 games towards the end of last season.

The fines and suspensions came about after trouble broke out in IfeanyiUbah’s rescheduled NPFL matchday 36 2-1 loss to Niger Tornadoes where two of their players were sent off.

Also two officials of IfeanyiUbah received 19 games suspensions following their involvement in the trouble that occurred.

POOR OFFICIATING STILL A BANE IN THE NPFL

One troubling area which is yet to be addressed by the LMC and which was evident in the just concluded NPFL season is the issue of officiating.

Following persistent bad officiating witnessed in some of the games last season, four referees and two assistant referees who officiated in different games on Matchdays 29, 30 and 31 came under LMC hammer.

The referees include Umar Mohammed of the Federal Capital Territory (FCT), who officiated in the Matchday 29 fixture between Niger Tornadoes and Plateau United; Aliyu Abdullahi of Kaduna State who was the match referee on Matchday 30 between Katsina United and Kano Pillars. Saleh Mohammed of Jigawa who handled the Matchday 30 between Plateau United and FC Ifeanyiubah and Samuel Agba of Cross River State who officiated on Matchday 32 between FC IfeanyiUbah and Gombe United were also sanctioned.

Emmanuel Udoh of Akwa Ibom State and Felagha Awudola of Bayelsa State who were the assistant referees to Agba in the FC IfeanyiUbah and Gombe United fixture also got punished.

SECURITY IN STADIUMS STILL AN ISSUE

Another area which the organisers of the NPFL need to address adequately is the issue of security in match venues.

Despite Plateau United clinching this season’s league title, the season is inconclusive due to the game in Gombe between Gombe United and Wikki Tourist which was abandoned due to crowd trouble.