Anthony Nwakaeme is disappointed that his club, Trabzonspor, failed to win their Sunday’s Turkish Super Lig away match against Besiktas which ended in draw at the Vodafone Stadium, Completesportsnigeria.com reports.

Trabzonspor surrendered a two-goal lead to settle for a 2-2 draw in the encounter.

Nwakaeme who made his ninth appearance of the season for Trabzonspor in the draw also ended his eight-game goal drought.

The 29-year-old last scored in September for Trabzonspor in their 4-0 win over Galatasaray. He he bagged a brace in the win. 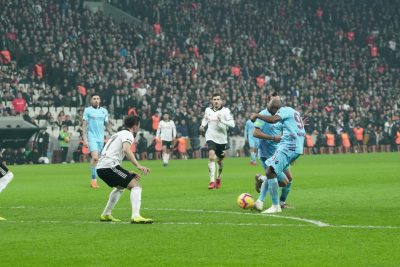 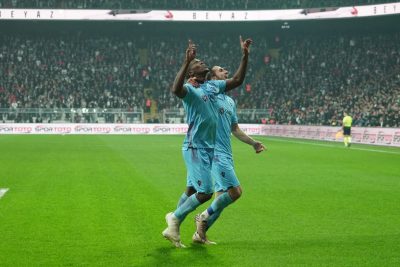 …and celebrates with teammate

The former Hapoel Beer Sheva forward took his tally to three this season in the Turkish Super League when he doubled Trabzonspor’s lead two minutes into the second half after Hugo Rodallega had open scoring before the break.

An own goal from Ogenyi Onazi reduced the deficit in the 57th minute for Besiktas when the Super Eagles defender deflected a corner from Halil Umut Meler into his own net.

Mustafa Pektemek earned a share of the spoil for the home team in the 90th minute.

“Good performance from the whole team too bad we didn’t get all three points. And thanks to our traveling fans your support was amazing. #Godisgreat#TN9,” Nwakaeme posted on his Instagram page.

Trabzonspor are currently fourth in the Turkish Super Log table with 26 points from 16 games.