Nyirenda: I’m Proud of Chipolopolo Despite Defeat To Super Eagles By Johnny Edward (photos by Ganiyu Yusuf) in Uyo:

Zambia coach, Wedson Nyirenda, says he is proud of his side despite their 1-0 defeat to the Super Eagles of Nigeria in Saturday’s FIFA World Cup qualifier in Uyo, Completesportsnigeria.com reports.

Nyirenda rues the Chipolopolo loss to the Super Eagles which ended their hopes of qualifying for their first ever World Cup.

The win sees Nigeria record 13 unassailable points from a possible 15 to qualify for the 2018 FIFA World Cup in Russia, six points adrift Zambia. The last Group B fixtures in November are now mere formalities.

Nyirenda congratulates the Nigerian team, adding that the Uyo match wasn’t an easy task for the three time African Champions.

“We want to congratulate the people of Nigeria for qualifying for the World Cup. It was not an easy game, just like the first one,” Nyirenda tells Completesportsnigeria.com.

“I think the game was a game of wits, like the first one because the difference was just a goal. 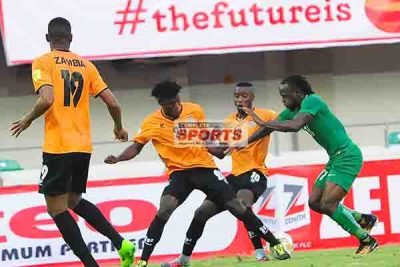 “We played the game dominating Nigeria, but with their experience, they got the needed goal from the half chance they created.

“We had so many injuries in the team, but inspite of that, we accounted for a good game and played very well. This is the best game in the qualifying series.

“Our objective has been to rebuild the team in a very short period of time. We had the nucleus of the team in short time. Very discipline and hardworking after one year.”