Odegbami: The Abuja National Stadium May Be Accursed But It Can Still Be Cleansed! For some unknown reason I am irresistibly drawn to Abuja, to a structure that should be the pride of Nigeria but has become its shame – the Abuja National Stadium.

The stadium that was conceived as a venue to host national teams from around the world, and to showcase the most beautiful and most modern city in Africa has become, within the space of less than two decades since it was built, a grazing ground for herdsmen and their cattle.  And this is no exaggeration, the state of the stadium environment is actually worse! On the eve of another momentous occasion wrought by Nigeria’s quest to represent Africa at the 2018 World Cup event in Russia, when the eyes of the entire world should be riveted on the city of Abuja on October 7, 2017, all attention will instead be trained on another town, a much smaller town in the deep south of Nigeria, Uyo, where the epic battle against Zambia will take place.

Why will Nigeria not play such a match as this in its federal capital city, a norm that is universal all over the world, to enjoy the attendant greater political, economic and social benefits that doing so would accrue to the city and the country? Undoubtedly, the National Stadium in Abuja was a wonder and a beauty to behold when it was first built and opened only a few years more than a decade ago. It was an architectural masterpiece, a truly magnificent edifice with state-of-the-art facilities comparable to any of the best in the world. 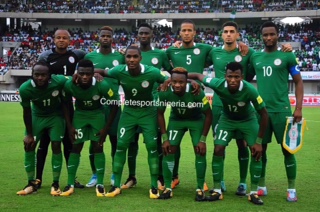 I do not pretend to understand what the challenges really have been, particularly why the country has turned its back on this monument but my spirit and heart tell me that there is a ‘curse’ that hangs over the Abuja National Stadium that requires some urgent physical ‘exorcism’ to put it back on track to fulfilling the noble national objectives for which it was built in the first place.

Without question, Abuja needed to have a stadium to compliment its political status and physical beauty, and to meet its sports obligations. That’s why in designing and constructing the Abuja National Stadium, nothing was spared – the best and most modern architecture and the number one construction company in Nigeria.

The final product, a true masterpiece, completed in less than two years, was ready to proudly host the 2003 All Africa Games, COJA, before an audience of over 6000 athletes, over 1200 international journalists, hundreds of thousands of spectators across all the venues, thousands of tourists and other visitors that follow the sports train wherever global or continental championships are held.

The edifice was deliberately sited so that it is the first sight that welcomes all visitors coming into Nigeria through the international airport in Abuja as they drive into the town.

It was to become what the Amsterdam Arena is to the city of Amsterdam in Holland – the hub of social engagement and activity in the city, an irresistible tourist destination for the army of visitors to the city, with five star hotels, restaurants, conference and event halls, cinemas, casinos, shopping malls driving the stream of human traffic that keeps the place open 25 hours a day, all the year round! In short, a place that never sleeps!
The goal was not a misplaced intention or over-ambition.

The Arena in Amsterdam, owned by the city, home to the biggest football club in the country, in continuation of building on the very emotive sentiments that the public attaches to sports heroes who drive the sports business every where in the world, the stadium will soon be renamed ‘Johan Cruyff Arena’ in memory of one of the greatest legendary footballers to come out of Holland, and who played for Ajax Amsterdam FC. Abuja had that project to look up to for guidance and even more.

Shortly after COJA 2003, a 10-year elite athletes development plan designed by the Australian Institute of Sports after a 2-year study of Nigeria’s sports problems and prospects was presented to the federal government for implication with the Abuja Stadium as the fulcrum. It was a plan designed to produce Olympic Gold medal-standard athletes around the 2012 and 2016 Olympic Games! The project was my idea, developed by Dan Ngerem and I, and funded by MTN.

By the end of the All-Africa Games, everything was set and positioned for that sports revolution, a win-win situation for sports, business, politics, commerce, youth empowerment through job creation and engagement, and, particularly, an explosion in the tourism business in Abuja. Suddenly, the bubble of excitement burst.

In the aftermath of COJA, the only thing Nigerians remembered of the event were the profligacy and day- light stealing of money that went on before, during and after the games. It was the most reckless and most wasteful event ever undertaken by Nigeria. 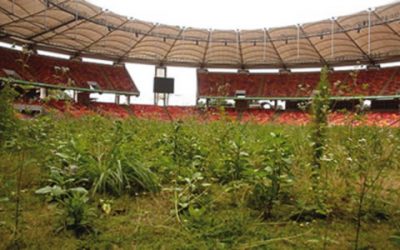 Odegbami: The Abuja National Stadium May Be Accursed But It Can Still Be Cleansed!

Since then the ‘curse’ set in, and the magnificent edifice began to groan and collapse under the weight of under utilization and neglect, slowly and steadily becoming afflicted by the cancer of corruption that had eaten too deep into the fabric of every facet of the stadium and the games. One of the costliest stadia to be built in the world became the shame of Nigeria.
COJA ended over 14 years but it will continue to haunt the country’s sports because the contributions of authentic heroes of sports in the country who had served, made contributions and sacrificed for the country and should have been legitimate beneficiaries of everything COJA had to offer, were disregarded and their futures mortgaged on the altar of selfishness, greed and blatant and brazen acts of corruption.Not before COJA and definitely not since, have Nigerians sat and observed helplessly and hopelessly how some people would commit heinous crimes of looting of the common wealth and dared them to go jump into the Atlantic Ocean and die or shut up! It was a rape of the national psyche and ethos.
The situation was made worse because every Nigerian knew what was going on and how COJA would never be probed, audited and accounted for because most of the top political leadership in the country were compromised one way or the other, either directly involved in this monumental fraud, or had their family members, friends and associates as cronies in the unprecedented racket. 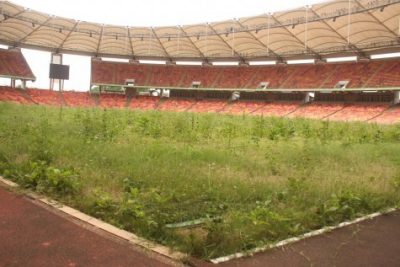 That’s why Abuja National Stadium has known no peace since then. It reeks of the tears, sweat and blood of patriots, departed and still alive, whose sacrifices were never acknowledged, whose works were never recognized or celebrated, whose contributions were disregarded, who have died, or are still barely alive living in penury, pained in their hearts and watching helplessly as the thieves enjoyed their loot and robbed them and the country of the greater glory and benefits that should have accrued to both, if only things were done properly and with integrity.
That’s why Abuja National Stadium is what it has become today. It is ‘cursed’!
Let’s Leave The Past Now And Look Ahead To The Future.Despite the ‘evil’ that roams freely around the country (and sports are not isolated) Nigeria remains a land bursting at the seams with opportunity, a land saddled with the natural responsibility to lead the elevation of every Black man that walks the surface of the earth, a country of men and women ingrained with the DNA of greatness, a country so rich in natural resources its transformation can be funded and can happen in a blink.What must be available, however, for a genuine transformation are a contrite spirit, restitution, repentance by the thieves and forgiveness by the victims.The Abuja National Stadium may be a simple physical structure, wasting and lying idle like the Ancient Marina’s ‘painted ship upon a painted ocean’, but through its state and story, we are reminded of what we all owe our country – to stop the looters and stop celebrating thieves and vagabonds, and start to celebrate and reward the humble, ordinary, hardworking and decent heroes of our society.
For now, that stadium remains accursed. But it should still be cleansed of the filth of the past, so that it’s original objectives can still be achieved.
Copyright © 2020 Completesports.com All rights reserved. The information contained in Completesports.com may not be published, broadcast, rewritten, or redistributed without the prior written authority of Completesports.com.