Odegbami: At Last, I Meet My Greatest Fan! In 1978, unsolicited, without even ever meeting me, he waxed a great song to celebrate my marriage as well as my exploits as a football player. This was at the height of my playing career in Shooting Stars Football Club and the National Team, along with several of my colleagues in both teams.

If there was one question in the world that I badly wanted an answer to, but did not get an opportunity to ask for several decades, it would be what inspired one of the greatest musicians, a legend of Juju Music, one who became a lecturing Professor in a university by virtue of the richness of his repertoire of musical talent and achievements, to write a song eulogizing me without ever meeting me first. I could never work it out in my head.

The song became an evergreen collection, etched permanently in the hearts of the football faithful in Nigeria.

The words of the song promote and celebrate excellence, and urge people to do their best in all endeavours and under all circumstances.

Yes, it has been 40 years, and the great chief of Egbaland and I only finally and properly met.

For a whole hour, we had a fantastic conversation in his lovely home in the beautiful, serene, and still largely rustic but rapidly developing city of Abeokuta!

Last week, by some divine arrangement, unusual circumstances reconnected us.

He had been looking for my telephone number and had asked a mutual friend if he could get it. Meanwhile, I had also been trying to reach him.

I had been worried how he would react to me coming from the blues to ask for a favour, after 40 years of not publicly or even privately acknowledging what he had done for me.

Still, I needed his input in a project I was working on. That would, of course, also provide me the opportunity to ask him my million Dollar question.

So, when my phone rang one evening about a week ago, I was shocked to see his name automatically appear as the caller. I could not believe it.

That meant that I already had his number listed in my phone, yet I could not recall where I must have got it from since I had never called him up on phone in my entire life.

But there it was, the name of the musical genius, staring back at me.

I picked up the call and waited in apprehension.

Then it was there – the soft, gentle, courteous, melodic, but firm voice of the great musical icon himself, sounding like celestial melody from heaven.

When Commander talks, he sings. He picks and expresses his words carefully and softly, almost seductively.

The voice was unmistakable. The great man was actually on the line calling ordinary me.

Then began a short but unbelievably friendly conversation.

It was if we had been friends forever, eager to hear each other out.

Agreeing to a meeting was easy and immediate, and time to do so was ‘yesterday’. We could not wait. So, we set a date and venue.

The day came quickly. Early that morning I received an sms, it was followed shortly by a phone call. We confirmed the time of the meeting – noon in his house.

At the appointed time, I arrived his home where I was being expected excitedly.

Remember, we had never ever met one-on-one before. Only the occasional meeting at a few parties, where he would be on the band stand and we would exchange the occasional and customary long distance and very quick and polite greetings. I never ran into him at any social event where he was not performing.

So, back to his Ibara Housing Estate residence. Our first few minutes together were of pleasantries followed by an interesting excursion into both our lives.

There was a lot of interesting catching up to do about each other. My life had been an open book, he told me.

He had been following my career and exploits with a lot of interest and fascination through the decades.

His life was the one that contained stories that must be told to be appreciated.

So, he told me about his roots, his parents, his place of birth, his growing up years, his choice of music for a career, his different interests and public deeds and projects, his total commitment to serving God through his Christian mission and humanity through his Foundation. He is trying to expand the scope of his foundation into new areas of empowerment amongst other things, that’s why he was looking for me.

I was flattered to say the least. I tried to match his openness by going into a little of my life. He halted me because, as he told me, he knew a great deal about the several things I had been doing that he had been following with pride through the years.

Then he answered my million Dollar question even without my asking.

He was very happy I had not let him down through the years, because before he decided to wax a song in my honour, he had never met me. He only knew me from a distance.

He followed my progress and achievements during my playing days, so much that when I was about to be married, the inspiration came that he should produce a song for me and my colleagues making the country and the Yoruba people very proud!

He fixed the time to release the song and wrote the title of the song even before he had scripted a line of the lyrics. He then waited until after I got married to give it some rationale and purpose before producing it.

One day, when he was convinced the time was ripe, without writing down a single line of words, he went into his recording studio and started to sing and to record the song.

Suddenly, as I listened to him in rapt attention, it happened.

He opened his mouth and started to sing the song, every line the way he recorded it 40 years ago! He remembered the lines, word for word!

I was mesmerized. I asked him how he could do that.

He told me that the song is one of his favourite tunes and that he played it in his car a few times every week whilst he traveled.

Then he called one of his aides to testify (as if I doubted what he just said). He asked him about his favourite song. His aide confirmed that even that morning my song was playing in the car as they drove into town.

He had done all of this without ever meeting me, quietly following my career with great interest and loving what he saw.

After that, I had no need to ask him my one million Dollar question any more. He had answered it in his narration.

I was so grateful and appreciative of what he did, etching my name on vinyl in a song that stamps my place forever in Nigerian football folklore.

For one hour, I sat and listened to one of the greatest sons of Abeokuta, capital of a State we both come from, the cultural and geographical space that birthed some of the most accomplished Africans in virtually all fields of human endeavor. Here was this divinely gifted, blessed and contented man, his humility his greatest strength, eulogising me even in my presence.

Truly, I realized, I was in the presence of a ‘god’.

To break the monotony of my silence, I sought a small favour from him. Even before I had finished asking, he laughed, stretched out both hands as if in supplication and surrender and announced, ‘You have my total permission even without asking for it’. 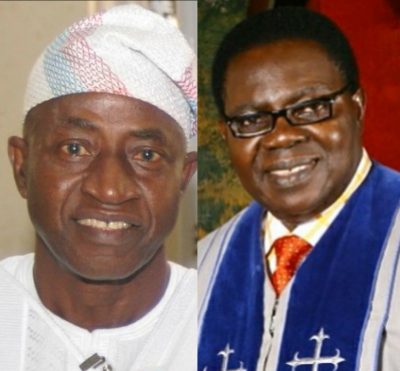 I continued to stare at the man in admiration and some envy. Even when I finally left his presence and his house, I could hear his gentle voice singing eternal words that have become a refrain for young people who are challenged to do everything they do to the best of their ability.

“Do it well, anything you do,

do it well anything you do,

do it your best”.

“From Kunle Awesu to Muda Lawal,

from Muda Lawal to Ojebode,

It is a goal o, from Odegbami”

Everlasting lines in an evergreen song.

In 40 years, I had not had the opportunity to thank him.

Last week I was led, I found it and I did.

Here I do so again.

Thank you Sir, Evangelist, Professor, (Commander) Ebenezer Obey-Fabiyi, MFR, for the honour you have done me in my life. One day soon, I shall retaliate.