Odegbami: The Man Who Named Me ‘Mathematical’ – Ernest Okonkwo For some reason his name is ringing again in the information superhighway.  On a few platforms in social media, I have been reading tons of comments by Nigerians
I cannot make out why his name has suddenly resurrected at this particular time because the comments reveal nothing about an occasion being celebrated or an event being remembered. The comments are about his work as a commentator and how he impacted the followership of Nigerian football.
For some reason, the elements are influencing a celebration at this time via the Internet by many Nigerians old enough to remember and recount the golden days of radio commentaries in Nigerian football led by the late Ernest Okonkwo.
I am using this medium to join in the conversations and to pay my own little tribute to a man that christened me ‘Mathematical’ a nickname that has become even more popular than the name I was given at birth.
Some 14 years ago, I was at the head of a delegation of 7 persons that went as emissaries of the Nigerian President, Chief Olusegun Obasanjo, to hand-deliver a letter to the President of Ghana about Nigeria’s proposal to bid, on behalf of 5 neighbouring West African countries, to jointly host the first football World Cup coming to Africa in 2010.
The delegation had included late Patrick Okpomo, late Samson Akiga, Tijani Yusuf, Kunle Raji, Patrick Ekeji and a few others.
A West African World Cup was an idea I had conceived and proposed to the Nigerian government. The government ‘bought’ it and wanted to ‘sell’ it to the other countries – Ghana, Benin, Togo, Cote D’Ivoire or Cameroon! Cameroon came into the picture only because Cote D’Ivoire were at the height of a Civil War ravaging the country at the time.
As we were ushered into his office in Accra, Ghana, President John Kuffour was standing and waiting behind his desk. As he walked towards us with the broadest of smiles on his face, both arms outstretched in anticipation of the traditional African embrace (instead of a handshake) the first words out of his mouth were: ‘Mr. Mathematical, welcome to Ghana’.
He was familiar with my nickname.
At a time in the 1990s (as I am writing this I can’t remember exactly when) I planned to organize, with the help of CAF, a first-of-its-kind conference of African Football Stars as a prelude to mobilizing footballers to demand for more positions and influence in the administration of football in the continent. Through the help of my friend in the BBC, Jenny Horrocks, I got all the telephone numbers of virtually all the great African footballers around the world at the time.
From my home in London, I started to ring them all up one by one, country by country, to share the idea. It turned out to be a test of my own popularity amongst the African footballers.
Until I started making the calls and connecting with them, most for the first time in my life, I had assumed it would take some time to explain to each of them who I was, after all I had stopped playing the game for many years. It turned to be an incredibly humbling experience.
I rang up the man who would soon become the President of Liberia, the only African player to have won the African, European and World’s best player award in the same year, in his base in Italy.
The response after the first hello was a gentle scream of surprise at the mention of my name. The first words out of his mouth were: ‘Mr. Mathematical!’
The great George Opong Weah was also familiar with the nickname ‘Mathematical’.
That name was coined some 41 years ago by a great man, a fantastic journalist, a radio commentator with a unique style that stood him out till this day – Ernest Okonkwo! 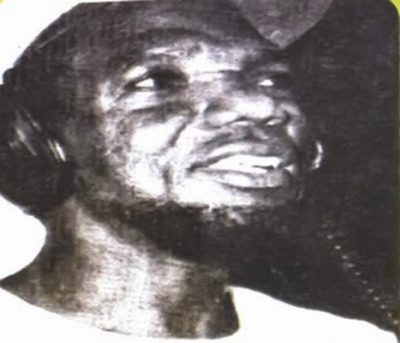 I recall how people used to turn down the volume of their television sets in those days and turned up the volume of their radio sets to watch a match at home. I recall also how some spectators would carry small transistor radio sets to match venues and listen to radio commentaries of the same match right inside the venue!
That was how powerful radio commentaries were rendered by great commentators, each with their unique style and strength in delivery.
Despite the brilliance of Ishola Folorunsho, Sebastine Effurum, Kevin Ejiofor, Tolu Fatoyinbo, Yinka Craig, Dele and a few others, Ernest Okonkwo stood slightly apart and ahead, shining just that little bit brighter in that constellation of stars that turned commentating into an art form and made listening irresistible.
Mr. Okonkwo was different. He gave players new names, reflecting certain outstanding or defining characteristics in their lives.
As he ran the commentaries, he would conjure descriptive words delivered in impeccable English and a masterful usage of football lingo. The magic is that wherever he described a particular player and gave him a nick name, it stuck, thereafter, forever.
That’s how he nicknamed Dominic Nwobodo of Enugu Rangers, ‘Alhaji’, after the player sustained a head injury during a match, wrapped his head with a bandage that made him look like a Muslim wearing a turban when he returned to the pitch.
Emmanuel Okala was ’Tallest’ for his towing 6ft 5 inches imposing frame. Christian Chukwu was‘Chairman’ for his commanding and leadership style on the field of play. Alloysius Atuegbu, stocky, short but powerfully built, was  ‘Blockbuster’. Adokie Amiesimaka, a law student when he started playing for the national team became ‘Chief Justice’.
There were ‘Slow Poison’ (Idowu Otubusen), ‘Elastic’ (Elahor), ‘Caterpillar’ (Kelechi Emetole),‘Quicksilver’ (Sylvanus Okpala), and so on. All became household nicknames in Nigerian football.
Ernest Okonkwo was a master of descriptive language, always conjuring words easily, effortlessly and aptly like a magician with his bag of tricks.
He had the power in words to give life to the most boring game. He was a flawless master of the English language, often taking listeners to the limits of their imagination.
Why he nicknamed me ‘Mathematical’ I never knew. I wanted to ask him when we met and spent a few days together in 1989 in Scotland for the coverage of the 1989 Under-17 FIFA World Championship, my first football match assignment as a reporter/analyst for the Sports Souvenir newspaper.
I never got to ask him the question because he was an excellent story teller and spent most of the three days regaling me about everything under the sun – his travels around the world; his love for reading books and how he would one day write one about his own experiences; his love for his wife and children, particularly one of his daughters, Amaka, that has now become a mother of three wonderful boys and a very successful practicing lawyer in the city of Lagos.
I met Amaka about three years ago and since then I have been interacting with her. She is working tirelessly trying to revive and keep the memory of her father alive. She is also pained that nothing has been done to immortalize him.
So, I never got around to finding out why he nicknamed me ‘Mathematical’.
Unfortunately, we often take life for granted and assume we can always do  tomorrow,  the things we should do now!
His death not too long after our meeting in Scotland put paid to that answer. It created a huge vacuum in the field of commentating. That field has never been the same since.
He must be rejoicing in his grave today. From the blues, he is being remembered again by thousands of those that knew and loved his work.
On behalf of all generations of players, I say ‘Thank You’ to Ernest Okonkwo. May he continue to rest peacefully in the beyond!
Copyright © 2020 Completesports.com All rights reserved. The information contained in Completesports.com may not be published, broadcast, rewritten, or redistributed without the prior written authority of Completesports.com.