Odegbami: The Next African Player Of The Year! The award ceremony for the 2016 Best African Player of the Year comes up on January 5th 2017 in Nigeria.

It is ironic that Nigeria may have one of the strongest national teams in the continent of Africa at the moment, yet the country does not have a single representative in the last five shortlisted players for the 2016 African Player of the Year Award! That speaks volumes.

At the start of the year 2016, the Nigerian national team was in shambles. The Nigerian people had lost all confidence in an unstable team that was ‘wobbling and fumbling’ from match to match, unable to score goals, unable to win matches, unable to convince anyone that they had the same DNA as the team that had made the Super Eagles brand a globally appreciated and respected phenomenon that always entertained with glimpses of huge possibilities in world football.

The two years preceding 2016 were ‘bad’ for Nigerian football and indigenous coaches were made to bear the brunt of responsibility for not producing a national team of class and of really outstanding players worthy to be crowned best in Africa, an award that Nigeria had completely dominated at a time not too far away in the past.

Looking back at the past few months, even I, the unofficial leader of the anti-foreign coach for Nigeria advocacy group, is now left holding feebly to my nationalistic ideals, and looking on as a change truly has come for the national team with the introduction of a foreign coach and a few players, suddenly, have begun to look like good enough candidates to wear the coveted African crown very soon. Unfortunately, for the 2016 awards, their surge into reckoning is coming too late in the day.

Last week, Africa made their choices and no Nigerian was shortlisted for the award, understandably. Their own time will come from 2017 when one of the present set of players dazzling beautifully in the EPL, and with several others coming up faintly in the horizon in other teams in Europe, will reclaim their lost crown and glory. I can guarantee that Victor Moses’ and Kelechi Iheanacho’s names will be high up on the list of candidates in 2017!

That’s why I am in agreement completely with CAF’s final choice of the last five players from whom a 2016 African player of the year will be chosen.

Who Do I Think Will Eventually Wear The Crown?

Pierre Aubameyang (Gabon and Borussia Dortmund). Borussia Dortmund have sustained their great performance from last season and are already in the chase for the German trophy as well as the Champions League this season. Pierre has remained as the main man upfront and has sustained his goal-scoring form of last season. No one will be surprised if he wins it again this year.

Riyad Mahrez (Algeria and Leicester City). I don’t know whatever is happening to this player that dominated the English premiership in the first half of this year, even emerging the players’ choice of Player of the year. He is now a shadow of himself for both his club and country. However, he may have done enough already to pocket the crown and take the crown up North again after a long spell of monopoly by West and Central Africa.

Sadio Mane (Senegal, Southampton and Liverpool). He has been consistent throughout 2016 for both Southampton and now Liverpool where he is shining very brightly, a key component of Jurgen Klopp’s authentic attempt to win the EPL this season.  His record of scoring the fastest hat trick in EPL history last season is startling.  On current form he is probably the best African player in the premiership. I will not be surprised if Liverpool win the league this season and he wins the African crown in 2017!

Islam Slimani (Algeria and Leicester City). Slimani’s biggest ‘draw back’ is that he comes from the same country and plays for the same team as Mahrez.  He will surely not be chosen ahead of his more favoured compatriot.

Mohamed Salah (Egypt and AC Roma). He may be the dark horse of this year’s award. His playing records everywhere he has played from 2011 in Basel, to Chelsea, to Fiorentina and now AC Roma have been impeccable. He is a great goal-scorer.  This year being an Egyptian is a great psychological advantage. His national team is doing extremely well and his role in it is pivotal.

So, who wears the crown? For me, by a very slim margin, it will be Riyad Mahrez!

It has crept in like a thief in the dark. How can the CJ be 60? That’s the age people start to be referred to as ‘old’.

Every time I see him, he looks exactly the way I first saw him strolling into the camp of the national team to step into the shoes left behind by Africa’s best winger at the time, Kunle Awesu, who had just emigrated to the United States after being a part of establishing Nigeria as an emerging African football power at the African Cup of Nations in Dire Dawa, Ethiopia. 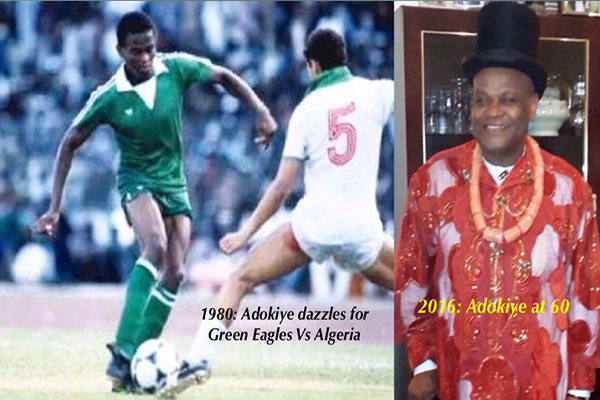 Anyone that would step into Awesu’s shoes must be huge, not this fine ‘small’ boy student from Unilag, who came into the national team without any fear or fanfare.

To everyone’s consternation he started to dazzle and mesmerize from day one. Here was a player way ahead of the football generation of that time, playing in the mid-1970s what the world has now adapted as one of the great revolutions of modern day football – left footed players playing on the right side of attack, and right footed players doing the same on the left. That’s what the world’s current best players are doing and succeeding at – Messi, Ronaldo, and Neymar.

But let it be recorded that it started with Adokie Amiesimaka in Nigeria’s national team in 1977/78!

Adokie was right footed, but only very few people realized that because he played as a winger on Nigeria ‘s left flank. He was an absolute beauty to watch when in full flight. He was sleek, fleet footed, elegant and a master of the dribble. He would cut through defenses like hot knife through butter and make the art of the dribble look so easy and so beautiful.

He was a thinker, never wasting any ball, always deliberately doing things with the ball that made sense to the onlooker.

I benefited from his style of play. Between us evolved a telegraphic relationship that was not shaped by any rehearsals but through an unwritten understanding between two players on either side of the attack reading and understanding what the other wanted to do with the ball.

He would dribble down the left flank, get to the goal line, feign a cross, and then cut the ball back with his left foot to his stronger right foot, and then lift a delightful cross that will sail and soar in the air begging for connection.

I often responded with a timely run that fetched us a few crucial goals. In the national team, Adokie’s crosses were partly why I scored more goals with my head than with my feet.

For five years we shared the limelight of Nigerian football.

Since we left the national team decades ago, our paths have continued to cross occasionally along the circuit of our different pursuits in life. We also chat occasionally, but have been friends with mutual respect for each other through all the years.

Adokie turned 60 this past week and I am reminded how fast we all are ageing with me surging a few years ahead.

I use this medium to join millions of Nigerians that he entertained and gave immeasurable pleasure to in our days in Nigerian football, to wish him a happy birthday and many more decades of useful service to the game, to his family and his country.