Permit me to tell you about two foreigners that played very significant roles in my career in football.

I do not expect that many younger people will know, or even remember them.

The first is my first contact with a foreign coach.

Playing under him took me to the tipping point, that moment, in time and circumstance, that makes the difference between being good and becoming great in an athletic career.

Allan Hawkes took me there.

He was the White, British-born coach of IICC Shooting Stars FC when I joined the club as a student of the Polytechnic, Ibadan, in 1974.

Before I joined ‘Sooting’ I was already a rising star in the football circuit of Western Nigeria. I had played for a few small clubs that actually won laurels in that part of the country. I was even shockingly awarded best player of the Ibadan Football Association, IFA, league (the biggest league in Western Nigeria).

I had played for NTC Football Club and won the Western State FA Cup in 1972; played for Housing Corporation and won the Olubadan Cup in 1973; played for the Western Lions, the State team assembled from several clubs to represent the State at the First national Sports Festival in 1973; played my first international match for the Western Lions against the national team of Central Africa Republic at the Liberty Stadium in 1973; and was invited to the camp of the national team, the Green Eagles, after the festival that same year.

It was after all of these that I joined Shooting Stars in the summer of 1974 where I trained fully under Coach Allan Hawkes.

Before I met him, I played mostly from instinct, enjoying the freedom of playing without any special appreciation of self, or understanding of tactics and strategy.

It was Allan that introduced the first level of discipline, organization and team tactics to my game, adding more purposefulness to how I played.

Coming from a more advanced football culture gave Allan Hawkes an advantage over the Nigerian coaches around us at the time.

The climax was when, as a student playing for Sooting for the two years leading to the Africa Cup-Winners Cup in 1976, he trusted me and gave me the opportunity to play without affecting my lectures.

At a crucial time during the preparations he actually moved the team’s training to my campus to enable me be a part of the team.

It was that level of confidence, plus his constant drills to improve my goal scoring skills that built my self-confidence.

With my over 6 feet height he taught me to use my head more effectively to score goals, and in the process implanted an imaginary football card in my head that tipped me over the edge to the realm of greatness. I started to be more clinical in front of goal.

In 1976, he turned Moses Otolorin and I into a healthy, competing pair of goal scoring machines. Between us we scored all but two of the 18 goals that the entire team scored in becoming the first club in Nigeria to win an African Club football championship.

That was the year we played against Tonnerre Kalala, the dreaded Cameroonian team that had the best player in the continent at the time, one of the greatest in African football history, Roger Milla, in its squad.

Taming a rampaging Roger Milla with consummate ease and composure projected the ability and skills of Idowu ‘Slow Poison’ Otubusen, leading to his invitation to the national team, the Green Eagles, where he played for almost two years!

What Allan Hawkes did for the players of Shooting Stars was immeasurable. I am not so sure he realized the extent himself.

In five seasons under him, twice I was the unofficial highest goal scorer in the national league.

Under his guidance 8 members of Shooting Stars were invited at different times to the national team, 7 played altogether and 5 played at a time in the team.

These were players that were mere ‘mortals’ until they met and trained under him. The physical and psychological transformation from ‘good’ to ‘great’ took place with him providing the tonic.

Recently, I was looking at a group picture of the Shooting Stars FC of 1976 under him, and I realised just how influential he was in shaping who many of us eventually became.

In the past three weeks, Allan and I have reconnected and have been communicating via my blog on the internet. I am glad to know that at over-80 now, he is alive and kicking, living with his wife in a quiet sub-urban part of England.

The last time, he asked after several of his old players. Unfortunately, half of the 1976 team have returned home to their Creator. The other half are alive and around, and would surely love to meet with him again one day in this life.

I have promised him that next year, when the Universe crowns me king, he shall be amongst those that will be invited to be a part of the celebrations. He will also be celebrated along with the citizens of a new Ogun State that stands on the periphery of a much-needed paradigm shift in Nigerian politics.

The second person is Lee Evans.

When we first met in 1975, he was one of the most famous American athletes in the world, a retired Olympic Gold medalist.

Lee Evans was an American of African descent, an athletics coach, a member of the Nigerian contingent to the Montreal Olympics in 1976. I was in that contingent too by divine providence, a story for another day. 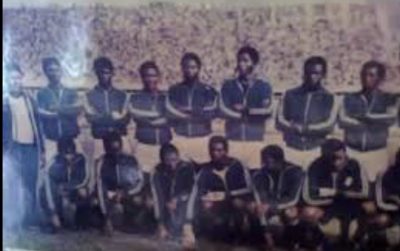 When Isaac Akioye was removed as Director of Sports of the NSC, Lee Evans left Nigeria and started moving around the world, coaching.

That was how I ran into him in Tanzania when Shooting Stars went to play a continental club match in 1978.

He was training world record middle-distance runner, Filbert Bayi, on the tracks of the stadium in Dar es salam where we were training.

He watched us do some physical training, mostly sprinting.

After our training, Lee called me aside and asked me if I had ever timed myself over 100 metres.

He said he thought I was one of the fastest footballers he had ever seen.

It was an eye opener.

To have one of the greatest sprints coaches in the world describe me in such terms was a turning point in my football career.

In the past 6 years or so, Lee and I have reconnected and become very close family friends, and in the past one year he has returned to Nigeria to take care of very serious issues relating to restoring his name, reputation and image.

I have observed his excitement at my political vision for Ogun State and believe he would be a valuable asset.

I have promised him also that, like Allan Hawkes, he too will be celebrated! So, help me God.