Odegbami: Sport Is Life and Life Is Sport! The Commonwealth Games in the Gold Coast of Australia is rounding off today. Whilst the games have been a feast of sports they have also being a painful reminder of our country’s past as well as its current state.

Historically, the Commonwealth Games remind us of our enslavement in a colonial past, a sad chapter in our history that we want to forget in a hurry when the most populous Black nation on earth became one of over 50 other countries conquered and controlled by the British empire, a tiny island state located thousands of miles away in a corner of Europe that dominated the world

That experience was a mental prison because, even in 2018, 58 years after Nigeria was released from that ‘jail’, the country still fails to reflect its original potentials and capability.

Next week we shall take stock of the countries performance.

The results are a shame!

Were Nigeria to be a patient in a hospital, the country’s condition would be described as critically ill. We have not done well as the biggest representative of the Black race in the world. That is reflected in our sports performance, even at the Commonwealth Games.

That is heavily weighing on my mind again as I write this. We still do not see sport for what it truly is – much more than recreation and medals!

Can’t we see clearly what is going on in most parts of the rest of the world? Did we not just watch some performances of our athletes naturally gifted but whose performances were just a mirror of the state of our country?

We should be doing better even as a country but we are not obviously. Yet some officials will soon return to the country, display a few medals as ‘achievement’ by a nation whose athletes should have mounted the victory podium so often during the Games that the rest of the world would have been mouthing our national anthem by now because of repetition!

What this confirms once again is that we do not understand. We don’t see the futility in separating any aspect of our lives from the whole of our lives; that the parts and the whole go together like Siamese twins, inseparably! That our sport is a metaphor for the health of our country.

In 1977, I visited China for the first time, then it was a Third World country like Nigeria. The evidence was everywhere. Only in the games of ping pong and gymnastics was China acknowledged as a global force in sports. 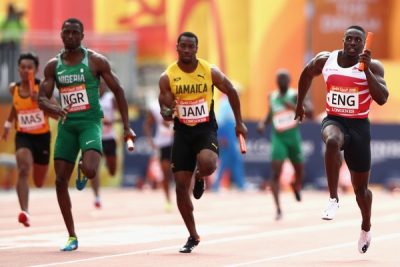 In that same year, Nigeria was a rising star, powered by huge human and mineral resources and roaring to emerge as Africa’s superpower in every field including sport.

41 years after that shared status, China has rapidly moved on to become an authentic global superpower, with the world’s second largest economy, reflected also in a growing army of athletes in most sports. Check the records and see where China ended up on the tables in the last three or four Olympic Games. On the other hand, Nigeria’s retarded growth is aptly captured in its dwindling fortunes in virtually all sports.

We have just seen this reflected again at the Commonwealth Games, and it hurts!

For those of us who see the country and its place in the world through the prism of sports, and appreciate that sports reflect the state of our country in all other spheres, we see sport as our national barometer and compass. It can reflect our progress just as it can also show us direction.

The more I look, the more I see the umbilical connection between sport and life.

Sport is embedded in every aspect of our life. It is much more than the recreational pastime that the government, unfortunately, ascribes to it.

Just to illuminate my postulation, some years ago, I visited Nairobi, Kenya, at the invitation of the Nigerian Heart Foundation, as part of a team sponsored by the IDRC in Canada to conduct research into the prevalence of Non-Communicable diseases (NCDs) in five African countries including Nigeria. (By the way, that research is still ongoing)

I was invited to share my experiences working with Nigerian youths in sports on an aspect of health studies known as ‘Active Transport’, a measurement of the amount of physical activity an individual does on an average daily basis, an essential and critical factor in the wellbeing of the citizens in a country

I found out that for children to walk (rather than be driven) several kilometres every day to and from school is a health blessing in disguise. It elongates a life span by several years down the line if sustained.

So, as part of the urban renewal and development plan of Mombasa, in the Kenyan city on the Pacific Ocean coastline, the Kenyan government incorporated designs for public parks, walk ways, lanes for runners and cyclists on roads and highways to encourage ‘active transport’ amongst all its citizens as a critical measure in tackling the menace of the ‘silent killer’ in diabetes, obesity, high blood pressure and other such heart-related diseases amongst its citizens.

Regulated physical activity, which is another word for sport, is indeed one of the most important activities in human existence. It is a health imperative to tackle every health situation. Exercise is key to a healthy life and healthy living.

I woke up on my first morning in the city of Shanghai, China, many decades ago to an eerie sight. As I opened the shutters of my hotel room, I beheld an unforgettable spectacle. Below me for as far as the eyes could see was an ocean of humanity. It was as if the whole of Shanghai had emptied into the huge park.

I watched mesmerizingly as this mass glided around in slow Kung Fu style synchronized movements, every part of the body stretched in exercise to the rhythm of some accompanying music. Almost an entire city was exercising together on a weekend morning.

I was later told that what I saw was an essential health routine for the citizens. The people were healthier for it and that was reflected in the huge reduction of the national health bill.

In Kenya and China, two countries that have taken sports seriously and developed them beyond the levels of recreation and the general wellbeing of the citizens, the annual social and economic contribution of sports and it’s athletes to both countries is in the billions of US Dollars.

I could go on and on, demonstrating how sports impact on other sectors of life in a country – tourism, education, infrastructural development, hospitality, culture, the arts, law, science and technology, medicine, diplomacy, governance, business, job creation, youth empowerment and engagement, leadership development, national orientation, and so on and so forth.

Indeed, through the eyes of a sports person, I can glean through every aspect of life and arrive at the same conclusions as experts in those specific fields.

That’s why with invaluable lessons derived through my sports experiences, I continue to work in ‘strange’ industries – in production, in management and administration, in service and human resource development, in manufacturing and marketing, in health and education, in film and arts, in music and dance, even in religion and agriculture. The list is endless!

It is an incredible discovery into a new, unappreciated and untapped perspective of the world.

When I proposed many years ago, that Nigeria and a few African countries should come together and jointly host the first multi-national World Cup, that was my inspiration.

I could see through my lenses and beyond, how the power of sports in many Third World countries, particularly Nigeria, have been blunted by self-inflicted crisis fueled by greed, poverty, ignorance and a poverty mentality , all vestiges of our colonial past.

Whereas, the by-products of a sports program are a strong catalyst for impacting all round development in a country.

I am sharpening my mind to use sports to drive my vision of a new Nigeria, a prosperous country of healthy people, rich, strong and productive, with a great future for the coming generations.

It is an amazing adventure that lies just ahead.