The Super Eagles are back.
Nigeria’s greatest image makers and international brand ambassadors are back again.

This weekend the Super Eagles resume their Africa Cup of Nations 2019 qualifier campaign in the city of Uyo, Akwa Ibom State.

A new look national team led by Ahmed Musa, Nigeria’s 2018 World Cup hero, will take on the Mediterranean Knights of Libya twice within a space of three days (the second leg match comes up the following Tuesday in Tunisia, where the Libyans now play their international matches as a result of the insecurity in their own country) to determine who, between the two teams would be at AFCON next year.

The match gives Nigerians the first real opportunity to see and to determine how good their new national team is in the absence of the two players that defined the team’s strength in the past decade – Mikel Obi and Victor Moses that have both voluntarily retired from international football for their country.

So far, no one seems to be missing them in action.

The new team, although only just being assembled and have played only a few matches (outside the country) since the end of the World Cup, looks very promising especially in the team’s attacking options, a huge deficit at Russia 2018.

Gernot Rohr appears to have learnt useful lessons from that painful World Cup experience when, with a little bit of quality from the midfield and upfront, Nigeria could have gone farther than the country did in a championship that was so open that anyone of several national teams outside the ‘regulars’ that have dominated winning the World Cup through past decades, could have won it.

Had Nigeria survived the match against Argentina, one that they had wrapped in their pocket up till close to the end of the encounter, the Super Eagles, weak as they were, could still have progressed to the quarter finals at least. That is the exaggerated opinion of some of us that are both pundits and patriots.

This Saturday, a new team will be birthed in Uyo in a match that is a litmus test for the German coach of the Nigerian team.

Nigerians are waiting on the other side of the match to gauge just how strong their new generation of Super Eagles is. 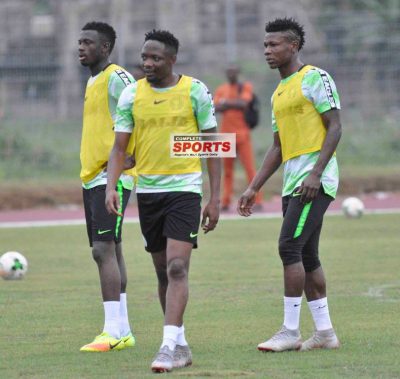 The most senior member of the national team has been elevated to the position of captain.

Such elevation is the practice in several countries. It is as old as the game itself, to pick the player that has served in a team the longest and make him captain.

It often works well psychologically, but sometimes it could also be detrimental to the overall ‘health’ of the team.

To lead a national team on the field of play is not a piece of cake. It is a huge responsibility that either enhances or takes a toll on performance.

Whereas Mikel Obi was a great captain of the Super Eagles because of his exemplary conduct on and off the field of play, he could not convert those attributes to fully influence the results of matches.

For most of the decade of his leadership of the team, at critical times he could not take games by the scruff of the neck and win vital matches with his singular performance.

Christian Chukwu as captain of Nigeria and Enugu Rangers FC did that effectively.

Stephen Keshi as captain of the national team and New Nigerian Bank FC also did that very effectively. They were both good examples of what it takes combine the roles of key player and captain of a team.

I believe that Lionel Messi and Argentina would have won the World Cup at a point in the past 10 years if Messi had not combined his role as Talisman of the Argentine national team with the huge burden of Captain.

That’s probably why Pele, at his best, was not captain of Brazil.

It is not every player that can take on that responsibility and use it to lift their game.

I could not when I played and captained the national team, the Green Eagles, for a brief, almost two-year period, at the twilight of my career.

I see a little of me in Ahmed Musa – winger, goal scorer, ‘ageing’ player and now team captain.

He does not look to me as such a consistent player, with a very strong enough personality and presence on the field, that can effectively combine the multiple roles. A player that is routinely substituted during matches is not good captain material.

So, I am watching and wishing him well as he takes on his new role as the anchor of a new generation of Super Eagles.

My friend, Tunde Kelani, came to see me the other day after listening to a lecture about the history of the Oyo Kingdom in the palace of the Alafin of Oyo by a renowned Nigerian scholar.

He was so pained by what he learned that his conclusion was that every Nigerian should receive a daily share of strokes of the cane for directly or indirectly contributing to the systematic destruction of one of the Black man’s greatest treasures here in Nigeria through wholesome ill-informed embrace of all Western cultural prescriptions at the expense of our own rich, original culture, experiences, history and wisdoms.

These are excellent and handy tools that Nigeria could have deployed to lead the Black race in global advancement.

Mention Brazil around the world and the first thing that comes to mind is football.

Mention Jamaica and the first thing that comes to mind is Usain Bolt and Sprinting.

Mention Kenya and you will struggle to separate the mind set of wild life/Safari and middle distance /long distance running.

These days, long after the British Empire has retreated into the archives of history, the empire is back through football, the EPL, probably the most followed social activity on earth, raking in mind-numbing revenue into the British economy.

Since USA ’94, without question, Nigeria’s reputation as a football country has grown globally. Unfortunately, not enough to overshadow its image as a corrupt African State with a good leadership-deficit that cannot convert its humongous resources and opportunities into prosperity.

This giant of African countries, with the potential to be the most successful black country on earth, remains stuck in underdevelopment, a reminder and theatre of all that is not right with the Black race on earth.

Sport is a natural activity for the Black person on earth for various reasons. The genetic evidence is in Brazil, in Jamaica, in the USA and the UK through the number of Blacks representing those countries at the highest levels of sport.

Yet, the source of these genes harvested by the West, is languishing in neglect, poverty of ideas and good leadership in Nigeria, in particular.

Stakeholders in Nigerian sports must never give up in their struggle to make successive governments realise the wasted opportunities in not paying enough attention to that critical multifaceted sector, one that can make serious meaningful contributions to health, education, diplomatic, image, social and the economy of their country.