Odegbami: The Crisis In Nigerian Football Can Be Resolved In 48 Hours! Do you know that we have a national emergency situation in Nigerian football?

Do you know that the situation is so precarious that the security of the entire country could be jeopardized?

Can’t people see what I see from my little observatory about what’s been going on?

Do you know that domestic football has stopped in the country and that for the past three months, since the start of the World Cup in Russia, clubs have not been able to play any matches as a result of the crisis in the Nigeria Football Federation, NFF?

Do you know that millions of the country’s citizens, particularly the youths in major football cities such as Enugu, Kano, Maiduguri, Jos, Ibadan, Akure and so on, have to find other ways to occupy the times they spent every weekend watching their local football clubs play matches? This social activity effectively dissipates their frustration with the harsh social, political and economic situation most of them have been going through in recent times in the country.

Do you know that several of the clubs have been unable to pay their players and officials because matches are not being played due to no fault of theirs, or the club owners, and yet they have to carry the brunt of the burden and responsibility of not doing any work?

Do you know that the national premiership will not be completed properly and according to the rules of the competition before October 14, the deadline for submission of the list of teams that will be representing the country in the continental championships that follow – the only lucrative competitive competitions in African football for which the clubs invest a lot of resources?

Do you know that sponsors of the league (if there are any) would be losing their investment in a competition as well as any attendant goodwill derivable by associating with it, that is supposed to help in their promotion, marketing and even Corporate Social responsibility agenda?

Do you know that all the opportunities that the players would have had to ‘market’ themselves in the game either for a place in any number of lucrative professional leagues abroad, or even for a possible call-up to the national team would have gone in a plume of the present crisis?

Do you know that all the clubs in all the leagues in the country, at all levels, would not have the opportunity of gaining promotion, and all their investment for the entire year would go down the drain?

Do you know millions of lives are directly and indirectly dependent on the wages and the accruals from the business and commercial activities of the various persons involved in the leagues? All of them would suffer because these breadwinners would not earn anything for most of the rest of the year?

All of these things, and even more, as a result of the shenanigans of a few stakeholders who consider their personal interests above the interest of the people, the game itself and the country.

To look closely at the issues that have brought the whole football industry to a standstill is to reveal the narrow-mindedness of all the stakeholders that know what is going on but choose to still hide behind a finger and let the whole system collapse.

Many people know the truth and choose not to speak up or even do the rightful and the needful to resolve the simple matter. Read some of the social media platforms on sports populated by sports gurus in the country and you will see what I mean.

Indeed, this whole NFA matter is very easy to deal with it.

If the persons involved in all these fracases truly realise the damage their action or inaction has caused, what is at stake, the hardships they have brought to homes and entire sectors of the sports industry, they would bury their narrow interest very quickly and allow the issues to be resolved amicably with neither side claiming victory and both sides happy thereafter.

That is the way to go. They must both be ready to shift from their stoic stands because neither side can claim to be in the clear of responsibility of the recent crisis. Where it not so, why would we have the same problem repeating itself every four years without a final resolution?

The shame is that the government that is responsible for all its citizens has been unwilling to do what would provide a permanent solution.

The truths are these:

1.the actors are playing football with the lives of Nigerians.

2.Nigerians just want to see genuine development in a game they love.

3.Nigerians really do not care much who is in charge of the NFF or who is not. Those people matter little. What matters is that the game is played and played well, and the whole country reaps the benefits of the pleasure, joy, victories, trophies and heroes that derive from football.

4.This whole crisis is about manipulation of the rules of the process leading to elections. Every one of the parties is involved, directly or indirectly, in manipulating, influencing or corrupting the process that leads to the same crisis every four years.

5.Government officials are also always involved in the crisis. Many of them, mostly out of government now, know the truth and the facts.

6.The present Minister of Sports is deeply involved in the current situation that the solution cannot come from him.

7.FIFA’s current intervention has not halted the crisis permanently. It will return soon again. 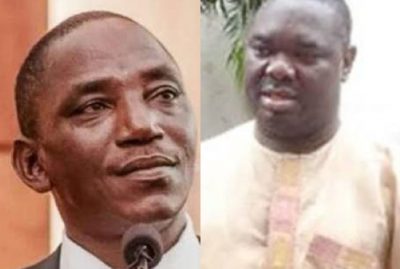 When two elephants fight, it is the grass underneath them that suffers.

That’s what is going on now and here in Nigeria.

It is the Nigerian people that are suffering.

The situation can be dealt with very easily.

That’s what The Minister of Sports thought he could do when he set up a group of former heads of the NFA to resolve the matter. They seem to have failed also, because the minister is also fully immersed in the matter that he can no longer be completely trusted by all the parties.

I can see the whole matter from my observatory.

This whole matter can be resolved in 48 hours.