I wish all my readers a Happy New Year.

I am happy to predict that the world, the way we know it now, a global system that has been deliberately designed and constructed in such a way that the Black person on earth should not succeed, will come to a shuddering end in 2030.

Before you start wondering when I became a doomsday soothsayer, read this till the end.

From 2030, less than 12 years from now, there will be a cataclysmic revolution that will reshape the world and earn Africans and all Black persons on earth the respect and dignity they deserve and have been denied for Centuries.

It will happen subtly through an innocent sport called football. Permit me to lead you gently into that vision and mission of 2030 even though the journey will start in 2019.

I am grounded in football.

So, I see the world through the lens of sport.

I am a living witness to how sport, particularly football, is massively impacting the whole world.

Some of us are actually thinking there is a ‘spirit’ in football such that since it was introduced the world has not been the same.  Think deeply about it.

Sport has become an untamable energy, holding the world captive in a firm grip like nothing else in human history. Not even religion.

I would not be surprised if the computations are done and it is discovered that the biggest industry in the world today is sport. Think deeply about it.

The industry has no geographical boundaries of any kind all over the world. It covers all sectors of life – academics, architecture, design and construction, technology, philosophy, psychology, science and technology, media, travel and tourism, environment, finance, law, medicine, manufacturing, merchandising, investment, insurance, wellness and fitness, security, infrastructural development, urban planning, entertainment, hospitality, fashion, food, drugs, gambling, tobacco, spirituality, culture, art, and so on and so forth.

It has more people involved in it than any other human activity, uniting people and nations through a healthy apolitical game played, enjoyed, marketed, followed, and celebrated in an atmosphere of friendship, fair play, equality, neutrality, and strict common rules and regulations. It harmonizes the world.

Think about it, that’s what sport does.

Do you know that, according to ongoing studies, there may be a conservative 5 million documented viewing centres where people (an average of 10 per centre) congregate several days every week to socialize around football matches?

Do you know that every home in Nigeria now has an aspiring young person passionately involved in one activity or the other around the game of football – player, supporter, agent, fan, viewer, and even investor?

Do you know there are now as many sports betting houses as there are religious places in the country?

In short, sport quietly continues to gain in strength as a most powerful tool for societal change. Deployed creatively and purposefully, it could have, as Nelson Mandela famously said, the power to change the world.

I have been singing this song for over two decades but few seem to understand and appreciate it.

Now I want to do more than ‘sing’ about it.

There is a great opportunity just ahead to bring an end to the warped political, economic and cultural lopsidedness in the present world order that denigrates and mentally and physically enslaves Africans and Blacks around the world.

That opportunity comes when West Africa holds the FIFA World Cup of 2030.

That’s one of my greatest motivations for going into politics – to use the power of sport to get political power that can create a new world order.

Nigeria shall lead in taking Africans and the Black race to a new place of global respect, dignity and equality, a place yearned for and cherished for Centuries by the race.

As I go around on my political journeys I can see a large swath of the ‘army’ that will fight this global battle. They are amassing in mushroom football academies sprouting on every available playing ground and field, milling youths willingly surrendered by their parents to coaches, scouts and games masters, all driven by passion and a dream.

George Opong Weah, footballer turned President of Liberia, has opened a new vista with his ascent to political power to development of his people and country through the power of sport.

I have tasted that nectar.

I shall be testing its efficacy in Ogun State in two months’ time.

I am pitting the power of sport, the power of the passionate youths, the power of positive values, and the power of the flood of sport followers against the present political forces of greed, corruption, coercion, personal interests, intimidation, wanton wastage of resources, nepotism, greed, under-development, poverty and neglect of the poor.

My mission is simple – to plant the seeds of belief that sport has the power to change an unjust global system, starting from Ogun State.

The Vision and Mission

Nigeria shall lead 3, 4 or 5 other neighbouring West African countries to host and win the FIFA World Cup in 2030. 10 years from now the region shall be ready to showcase a new world located in Africa to the world.

Ogun State shall plant the seed and benefit the most as the epicenter of the entire enterprise.

West Africa shall become a single economic, cultural and social hub in fulfillment of the dreams of the founding political fathers of Africa at the dawn of their countries’ Independence around the 1960s.

The region shall be one huge 250 million-strong borderless economic market – one visa for all visitors to the region; a rail system running across the enchanting West Africa coastline hugging the Atlantic Ocean; a super highway from Doula To Dakar; a major airline and modern airports connecting the region; a common currency; coordinated international security across borders; most modern medical, wellness and fitness facilities and personnel; innovation in deployment of science and technology; birth of an authentic tourism industry; a cultural renaissance and the reconnection  of our Black brethren in the Diaspora to their roots to help develop a new kind of environment, a new global economy; and rekindling of the fire of a new Black spirit, consciousness, culture and civilization.

The world will never be the same again.

The present world order designed by the West will come to an end in Africa led by Nigeria that will be fulfilling the dream of Pele in 1989 that an African country (most likely Nigeria) will win the World Cup by the turn of the last Century.

It did not happen then.

It has not also happened since then.

But I see the real possibility just ahead in 2030!

The change will not happen by wishful thinking, but by the active participation of the people in spearheading the creation of that future from here and now! 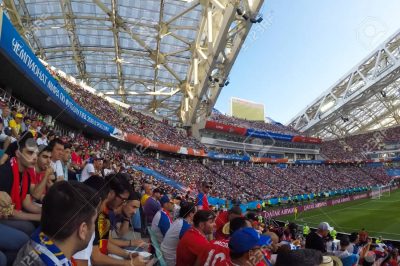 This project shall engage our youths and people in the most ambitious undertaking in history using sport to earn Africans and all Black persons their rightful place as equal partners to every other race on the planet.

That global battle can only be won when we shift the battle ground to the African continent, deploying the ‘weapon’ of sport to create our own indigenous cultural, social, political and economic prescriptions and showcase them to the world.

That battle must start from the most populous, prosperous and powerful Black nation on earth, that has the resources (human and natural) the intellectual capacity and historical experience to achieve it.

“There is a level of poverty in Nigeria that should be unacceptable. I cannot understand why Nigerians are not more angry than they are”

“Let me tell you what I think you need to do. You should encourage leaders to emerge who will not confuse public office with sources of making personal wealth. Corrupt people do not make good leaders. Then you have to spend a lot of your resources for education. Educate children of the poor, so that they can get out of poverty..give young Nigerians good education. Teach them the value of hard work and sacrifice, and discourage them from crimes which are destroying your image as a good people.”

(Excerpts taken from a 2007 interview with Mandela conducted by Dr. Hakeem Baba-Ahmed)

The starting point in March 2019 in every nook and cranny of Ogun State.

The citizens are to reset their thinking caps and abandon the old political ways that have brought them nothing but ill-wind and penury.

They must build on the foundation of political leadership that is not about the richest or the most powerful, but about integrity, humility, decency, good conduct and good character.

It is the seeds of a new world order that will be sown in May of 2019 that will fully blossom in the summer of 2030 when Nigeria wins the priciest trophy in history (the FIFA World Cup) and uses hosting it to create a new world order.

I wish all a very Happy New Year!