Hapoel Beer Sheva midfielder, John Ogu, is delighted to have captained the Super Eagles in Tuesday’s exhibition game against Liberia that had President, George Weah feature for 79 minutes in the encounter, reports Completesportsnigeria.com.

The game was in honour of the Liberian President, former World, European and African Footballer of the Year, Weah who used the game to retire his famous number 14 shirt for Liberia.

Ogu starred in central defence as first half goals through Henry Onyekuru and Simeon Nwankwo sealed the win for Gernot Rohr’s men despite a late penalty from Liberia’s No.9.

“I will never forget this day in my life. Leading my country with such wonderful talent in a game against Liberia with President, and the only African player to win the Ballon d’Or,” the 30 year old tweeted. 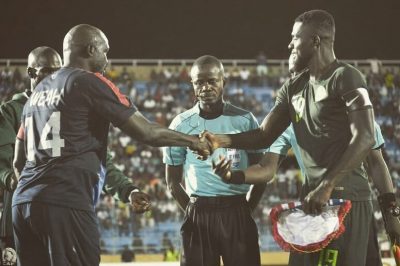 Weah played for Monaco, PSG and Marseille in France, AC Milan in Italy and for Manchester City and Chelsea in the English Premier League before he retired.

Ogu is expected to feature for Hapoel Beer Sheva when they take on FC Ashdod in an Israeli Premier League clash on Saturday.