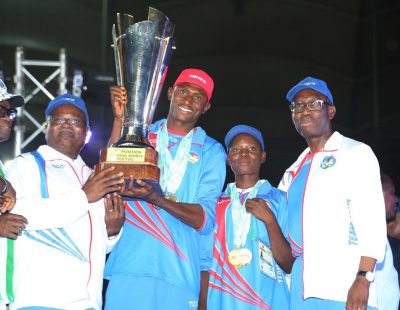 “The Government and people of Delta State congratulate and celebrate with the contigents to the games for making the State proud,” Governor Okowa said in message tweeted on Delta State government’s Twitter handle.

“Since this democratic dispensation in 2002 the state has been on top of sports.

“We successfully hosted the athletics championship in August even though it was given to us 9 Months earlier.

“We need to grow stars of the future by catching them young and have them dominate sports in Nigeria, as well as support the nation.”

Trophies were presented to states which finished first, second and third on the medals table on the final day.

There were performances by musicians, including CDQ, Funbi, Dice Ailes, Small Doctor, Skeles and Sheyi Shey in the closing ceremony of the festival at the National Stadium, Abuja.

Edo State will host the next edition of the National Sports Festival in 2020.