Oliseh: My Goal Vs Spain One Of My Best Moments In Life By Johnny Rddward:
Former Super Eagles captain and coach, Sunday Oliseh, has described his stunning strike against Spain at the 1998 FIFA World Cup in France as one of the best moments in his life, Completesportsnigeria.com (CSN) reports.

Nigeria defeated Spain 3-2 in a enthralling encounter with Oliseh scoring a cracker from 35 yards in the 78th minute to win the game for Nigeria after goals from Mutiu Adepoju and Garba Lawal had restored parity for Nigeria at 2-2.

Fernand Hierro and Raul Gonzalez scored for Spain to hand them the lead twice in the encounter.

Oliseh responded to a video trivia question asked on Twitter by the FIFA World Cup Trivia account in December on who scored the winner in the nerve cracking encounter after the results announced on Monday night.

Oliseh wrote beneath the trivia: “One of my best moments in life.” 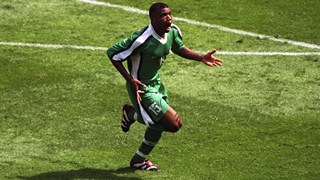 Interestingly, Oliseh polled 38% of the 80 votes casted while Austin Jay Jay Okocha, Finidi George and Emmanuel Amuneke had 43%,14% and 5% respectively.

Now the manager of Dutch second division side, Fortuna Sittard, Oliseh has secured a promotion play-off for the club after one year by the virtue of winning the Second Period (match 11 to match 20) of the current season. There are four Periods in the Dutch second tier league which winners qualify to participate in a promotion play-off at the end of the campaign. Only the club that top the 20-team league will get automatic promotion to Eredivisie (the first division).

Sittard’s next game is away against Dordrecht next Friday.